At first blush of this innocent in Europe, Bratislava, Slovakia seems to be in the blossom of youth.  Younger people were everywhere on the streets and seemed to be enjoying the relative freedom of living in an independent Slovakia.  In addition to numerous historic buildings floating among massive, cold concrete apartment complexes leftover from the Soviet era, modern structures of glass and steel meld into the landscape.  One of the most notable structures is the UFO or SNP Bridge (Slovak National Uprising) Bridge.  According to Wikipedia,  "It is the world's longest cable-stayed bridge to have one pylon and one cable-stayed plane."  The UFO restaurant tops the pylon.  Here is a view of the bridge and city - old, new, and Soviet era - from Bratislava Castle. 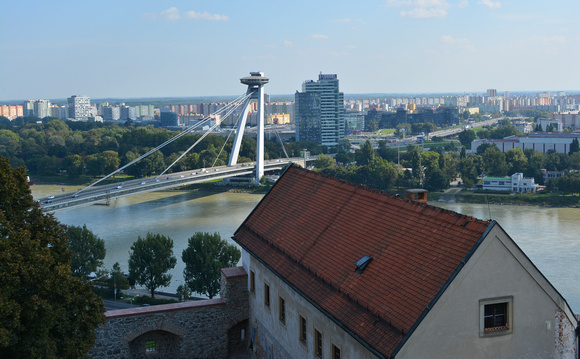 One of the regrets I have about the drive and tour of Bratislava Castle is that (probably because of security reasons, not to mention the narrow streets), we were unable to photograph the huge variety of houses belonging to ambassadors to Slovakia from around the world.  They ranged in style from Mies van der Rohe modern to Mediterranean villas, and California ranch houses. 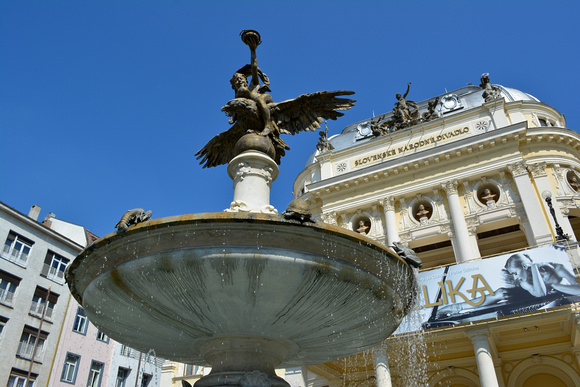 The old Slovak National Theatre was built in 1886 and is considered "neo-Renaissance" style. 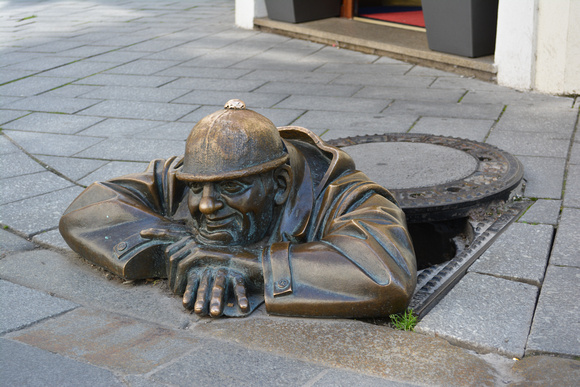 "The Watcher" or Cumil, Bratislava, Slovakia

Whimsical bronzes appear in the oddest places in  Old Town Bratislava.  This fellow is titled Cumil or "The Watcher". 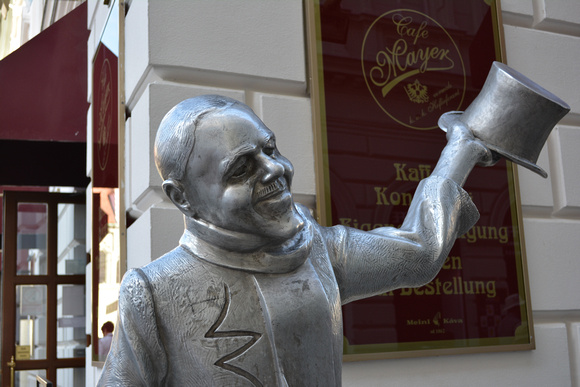 The Smiling Gentleman welcomes and bids adieu to clients of Cafe Mayer, founded by Julius Mayer in 1913. 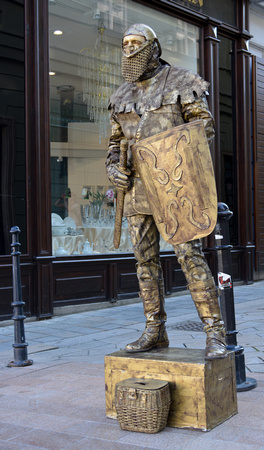 I love the street performers who change themselves into live statues and catch passersby off-guard.  I did not think about it at the time, but this fellow is probably Roland, given his proximity to the Roland Fountain.  He is considered the town protector.

a pasion for the [email protected]

Steve Immel(non-registered)
The trip has given resonance to your writing and the writing has become even more critical to your posts. Of course, I really like that the storytelling has become more important. Both imagery and commentary are outstanding. This, by the way, is written from the orderly confines of my office in Taos, New Mexico.
D & D(non-registered)
What a charming part of the world you have captured in words and commentary. We particularly applaud your photographer's perspective (and your dexterity) that captured the flowing fountain and ornate theatre against the brillant blue sky. Great shot!
cristina(non-registered)
LOVE the adventure - combo of your evocative writing and marvelous pix
Fred Barraza(non-registered)
Nice to see.
No comments posted.
Loading...