Who would have known that the "new normal" during winter in New Mexico might be overcast skies with broken sun?  It seems that has become a trend this winter, at least in the northern part of the state.  However, it is January, and 2016 at that.  We cannot become too complacent about the wonderful New Mexico sunshine.  So just to let us know that it is indeed winter, last week brought a couple of episodes of ice fog here, and rime ice south of Santa Fe and in the Lamy area.  Fellow artist and photographer Kathy Olshefsky posted some nice shots on her Facebook page.  News reports from Roswell and Carlsbad in southern New Mexico still showed the ground covered with snow as recently as this weekend.  A little unusual for those climes but any moisture in the land of enchantment is almost always welcome.

The first event here on the piñon/juniper mesa rendered blocky ice, looking a little like the flocking sprayed onto artificial Christmas trees.  Because of the colder temperatures, it lasted well into the day.  I suspect many a photographer who had a good pair of gloves and outer wear was making the most of the landscape.  The juniper portrait below gives you an idea of the density of the ice that settled in the tree's top. 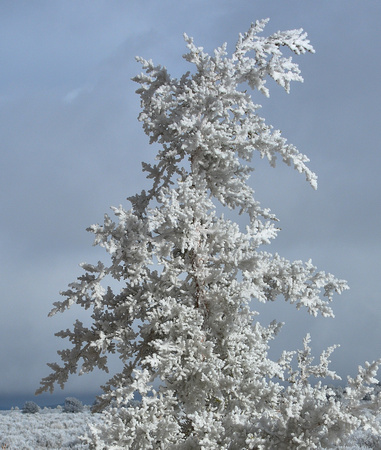 The detail here of the inner part of the tree shows the character of the ice crystals gathered together. 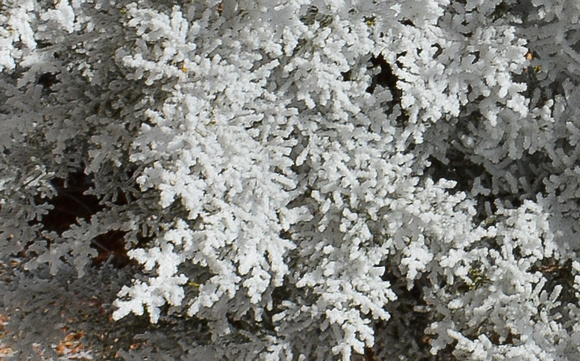 And one final shot, again showing the small ice blocks on the end of a branch. 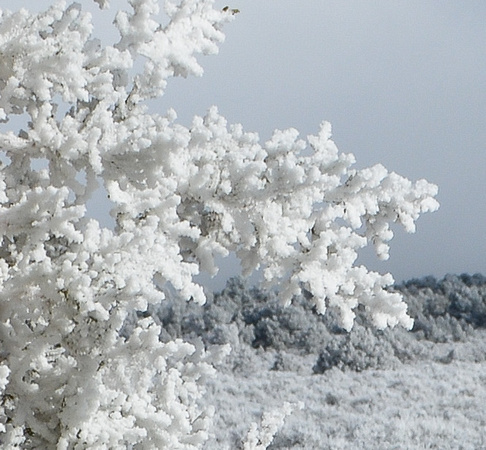 Making the most of any season and environmental condition is my mission in photography. Sometimes, it is not the most comfortable situation, but I try to shoot and experiment every day, or at least work with photographs I have taken to find their true essence.  For instance, what I did right, what could be improved upon, and how exactly to do that.

I wondered about the weather yesterday heading to Taos for an engagement shoot.  I knew part of the shoot would be outside, but the weather was perfect, and the couple couldn't have been lovelier, creative, and prepared, and it made the shoot a joy.  I will talk about that in next week's blog.

Steve Immel(non-registered)
This is a wonderful study of the ice laden Junipers in your neighborhood. I like seeing the branches against the faintly blue sky. Images two and three show how thick and chunky the ice really is. Connie's poem pairs beautifully with these lovely images.
Catherine Sobredo(non-registered)
Beautiful images, Daryl. The roads here towards higher elevations (Lake Tahoe) to find images like these have hindered this quest. Looking forward to images from yesterday's shoot.
Connie Taylor(non-registered)
In reference to the "new norm" of overcast NM sky I wrote this morning:

Time for Tequila or Scoth or a good joke or a hike or a smile or a good book or all of the above.
No comments posted.
Loading...