120 degrees in Palm Springs, California.  116 degrees in Phoenix.  95 degrees here on the mesa yesterday at 7,800 elevation.  And last week, it was 75 degrees in Nuuk, Greenland, which broke a heat record.  It is June, it is hot, and it is Summer Solstice, which this year also includes a full moon.  Sunrise was at 5:44 this morning and sunset is at 8:23, Mountain Daylight Time, providing a nice extended twilight or gloaming period.  It seems like just yesterday we were figuratively celebrating the winter solstice and clawing our way back to more daylight and out of winter.  Now we actively seek shade.

Here is a reflection of the sun in the form of a yellow fawn lily, found in moist, cooler mountain areas. 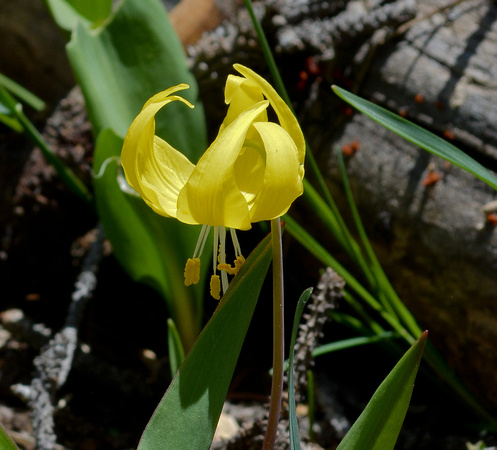 In early summer, flowers are full of bees, and it seems that baby birds are everywhere. Some, like raven chicks, don't look young at all.  By the time they have fledged, they are as big as full-grown adults.  You have to pay attention to differentiate the babies from the adults.  The tops of their heads look like they've been given a buzz cut, and the sides of their beaks reveal a rosy glow as shown in the image below. 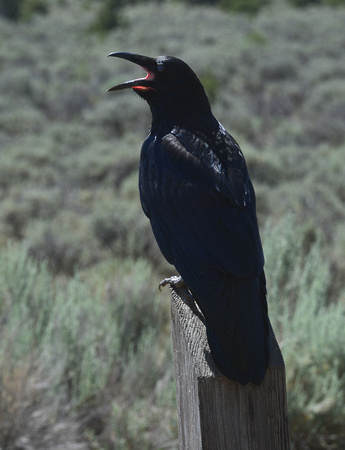 But the real distinction is their voices.  At this point, all they know how to do is squawk and they do that a lot, especially when the parents fly in, bringing snacks.  The subtleties of raven-speak have yet to be learned and that process takes a back seat to taking flight and landing, and of course, play.  After feeding, they proceed to play with whatever they can find - rocks, feathers, desiccated mouse heads, sticks - and in the water.  Here is one of those darlings now, who, being a good teenager, is not yet aware of the mysticism and symbolism associated with their ancestors over the millenia.

Like the raven, the movement of the earth around the sun with the changing seasons that action provides, gives us pause, and an opportunity to think about nature and new life emerging all around us.

Daryl Black(non-registered)
Thanks, Ingrid! Glad you are enjoying your ravens as well. They are impressive birds, aren't they? Now if Mom and Dad Phoebe can keep them away from their three chicks (who just did a practice flight today), we'll all be happy.
Ingrid(non-registered)
Yeah, we have had some of those squawky raven babies on our bird bath. They looked just like your wonderful photo; they are very funny to watch when trying to drink water with those already huge impressive beaks. We are filling containers twice a day and it is really appreciated.
Daryl Black(non-registered)
Thanks, Steve. As long as those ravens, i. e., juvenile delinquents don't mess with the satellite dish, we'll be happy campers.

You stay cool as well
Steve Immel(non-registered)
What a sweet commentary about the mythic raven this is, Daryl. I hadn't known that recently fledged ravens are already adult sized and of their limited vocabulary in youth. I learn so much from your posts, this one especially so. The yellow fawn lily has the right idea: the high mountains are the place to be about now. Stay cool, my friend.
No comments posted.
Loading...