Celebrations abounded yesterday for Christmas and Hanukkah, and New Year's Eve on Saturday and New Year's Day American football bowl games are fast approaching.  With the abundance of assorted alcoholic beverages consumed at this time of year, I am celebrating the rarely heralded artwork that graces the bottles by featuring one wine label this morning.

Some of the best commercial art being produced in our time ends up as book and magazine covers, in advertisements, on websites, and on labels.  The label featured in today's blog is not my personal advertisement for the wine.  As you can see in the photographs, the bottle has yet to be opened.  But the label is simple in its lines, straightforward, and compelling in its story telling.  I thought I would use it in different settings, including in the snow, to see how the dark bottle and its label would photograph.  When snow covers the landscape, it also becomes part of life.  Just as it is fun to have snowball fights, it is also fun to photograph it in addition to shoveling.   First, here is an image that showcases the label. White background, black, red, and silver lettering, and a man in a suit whose hat is floating in the air. 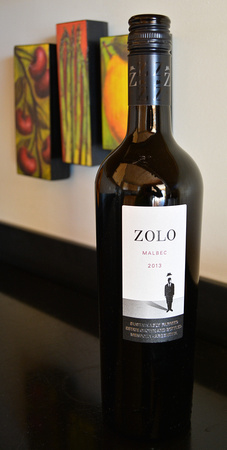 Now to snow as the backdrop.  The spent blooms from some snakeweed, as well as a drift and mouse prints, provides a nest for the bottle, drawing the eye to the bottle's label. 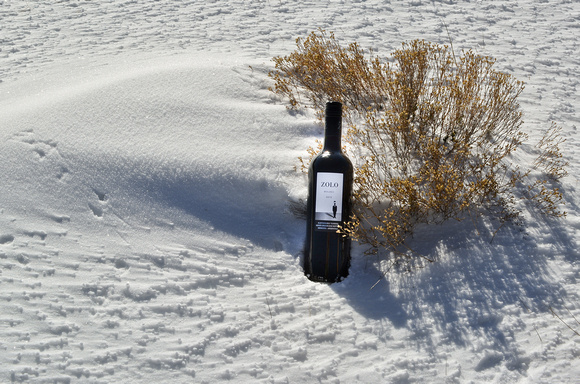 Under a juniper tree, with mountains in the distance.

And finally, a black and white shot with the graupel-covered snow and shadow. 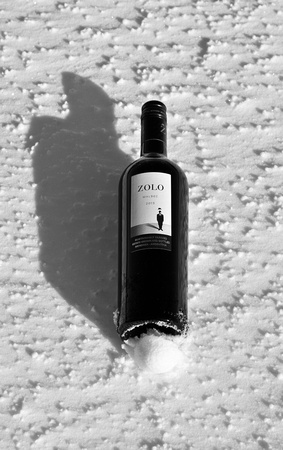 May 2017 bring renewed creativity and the energy to highlight and share your art with people of all ages.

Steve Immel(non-registered)
A sweet series, Daryl. The Zolo label is clean and modern and an apt partner for the graupelled snow. As is so often the case, the black and white image makes the most of the pebbly texture.

Happy New Year to you and Fred.
TTT(non-registered)
graupelled snow texture - stunning capture. When you opening the bottle to celebrate with all us, your loyal readers? Looking forward to your blog to keep us all inspired in 2017.
No comments posted.
Loading...