Some think of Memorial Day as the official opening of summer, others know it only as a three day weekend and holiday from the work week.  It was established in 1868 as Decoration Day (according to Wikipedia) by "the Grand Army of the Republic, an organization of Union veterans founded in Decatur, Illinois...as a time for the nation to decorate the graves of the Union war dead with flowers."  Years passed, allowing time to wash over the nation and slowly stitch it back together, and the day eventually became known as Memorial Day.  As opposed to Veterans' Day, on which those who served in the military are honored, Memorial Day is set aside to celebrate those who lost their lives while serving in the American military services.

Many of you, like me, may have familial connections to the Civil War of these United States.   As a photographer, I have great admiration and respect for pioneer photographers, including Mathew Brady (and his team), Alexander Gardner, and Timothy O'Sullivan, who documented the war in detail.  They could be called the first photo journalists, and their work brought the war home.  But so did the work of many lesser or unknown photographers who made hundreds upon thousands of tintypes of soldiers in uniform with their arms at hand.  Matted in metal, and tucked into hinged bakelite cases, these were a remembrance that fit neatly in the hand of a lover, mother, or father.  Bakelite was one of the first plastics and its official name is worthy of the spelling bee - polyoxybenzylmethylenglycolanhydride.  That hard as rock substance is probably one of the reasons so many of these images still exist today.

I have one of these jewels, shown below.  Our friend, Lawrence T. Jones III, author of Lens on the Texas Frontier, is considered the premier private collector of historic Texas photographs.  I showed Larry the photograph and case when he was in northern New Mexico several years ago.  He indicated the soldier was in the Union Army, and probably in the infantry.  He is wearing a forage cap.  That is all I knew because there was no reference or identification with the photograph or the case.  The print media, however, saved me.  I have looked at the obituary newspaper clipping saved with the family photographs before, but somehow did not look seriously at the names and details printed therein. Relatives were listed along with the cemetery, from which I found the gravestone, and the fact that he was an "old soldier."  Now I know that this man was my father's mother's father or one of four great grandfathers.  John W. Scott, shown here, was photographed as a corporal in the 31st Iowa Infantry, Company A in August 1862, and was mustered out as a sergeant in Louisville in 1865. 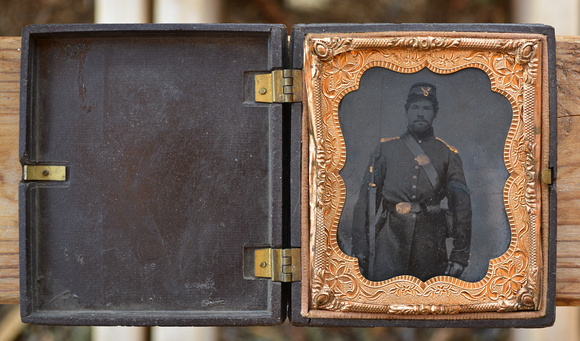 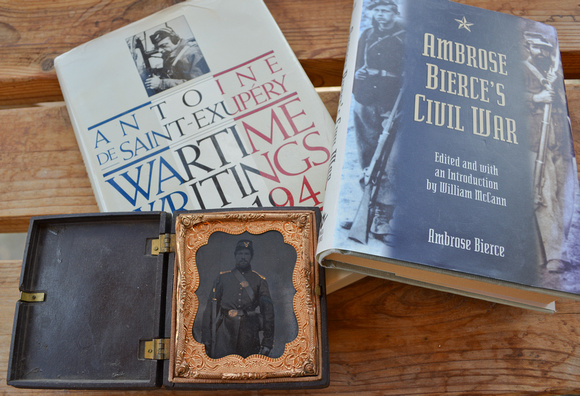 I spent some hours pouring over the digitized images in the Liljenquist Family Collection of Civil War Photographs housed at the Library of Congress.  There are 924 photographs of Union soldiers (and others) as well as 378 of Confederate soldiers, and I began looking at them, hoping to come up with an identified duplicate but was unable to find one.  Then I began looking at the metal mattes used as well as the Bakelite cases.  I suspect someone knows which mattes and cases were used by which photographers, because they are all slightly different and perhaps served as "chops" or copyrights, but I have not gotten that far in my research.

My take away from this is an admonition to myself and others, particularly in an era of Instagram and digital photography.  If you keep images only in digital format, add information about the photograph to supplement the metadata that goes with it.  For instance, in Lightroom, you can add a title, caption, and sublocation, so that you will have more than the all-important capture date and time, and camera facts.  Otherwise, those who follow and look at the work, might never know about the person, place, or thing you have photographed.  It is, after all, Memorial Day, a day a remembrance.

Lawrence T. Jones III(non-registered)
Thoughtful commentary and so appropriate for this day.
Fred Barraza(non-registered)
Thanks for that well written message Daryl. So many still don't know the significance of the day. And, I always enjoy the photographs.
Steve Immel(non-registered)
This is a most thoughtful and instructive post, Daryl. It's such a treasure that you have this wonderful memento of your great grandfather. Your words remind us that we tend to forget the real reason that we celebrate Memorial Day. A moment of silent appreciation is in order today.
No comments posted.
Loading...