the over and under of weaving

During the Wool Festival last weekend, answering four basic questions about weaving consumed a good portion of Fred's time in his booth.  So I thought it might be good to shoot the process for the purpose of explanation.

The first was "On what kind of loom do you weave?"  He weaves on a Rio Grande walking loom.  Fred's particular loom has a wealth of character, as it lived in a woman's greenhouse for some time before it came to him.  Being made of pine, it was a little warped and required adjustment in the form of rebar, screws and additional pieces of wood.  Below is a photograph of him standing on the treadles of loom.  He can use up to four treadles but since he is doing weft-based Spanish style weaving, he only uses two. 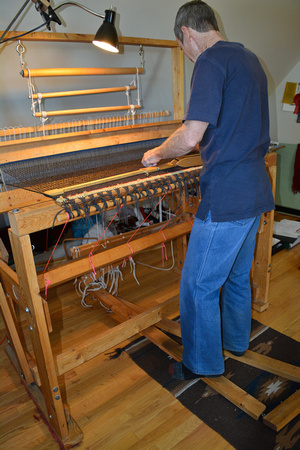 The second question:  Do you make these pieces?  Answer to that is a simple and absolute "Yes."  Here are a few shots of the process of weaving a rifle scabbard. 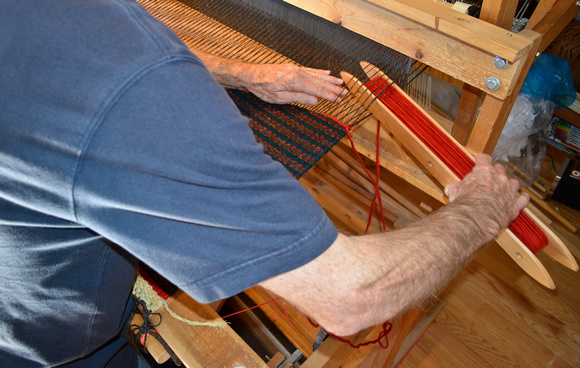 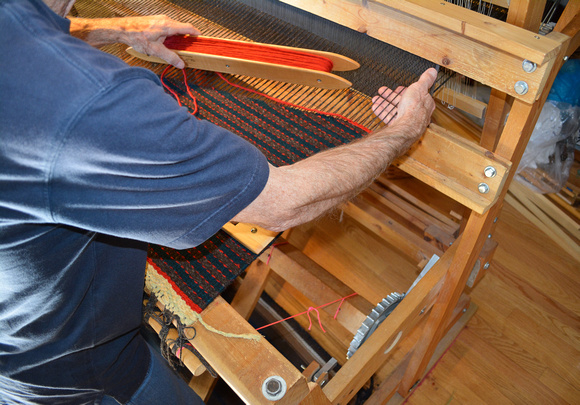 The third question:  "Do you dye your own wool?"  Although we experimented one winter day years ago and dyed a pound of lovely spring aspen green, the woman who dyes the Navajo-Churro wool that Fred uses is the legendary Connie Taylor.  She is the National Registrar for Navajo-Churro sheep in the United States, and if anyone owns a rug woven by Fred, 99.5% of the wool has been dyed by Connie.  Some of it also came from her flock.  The colors shown in the scabbard below are Ganado and teal, along with undyed, natural brown-black. 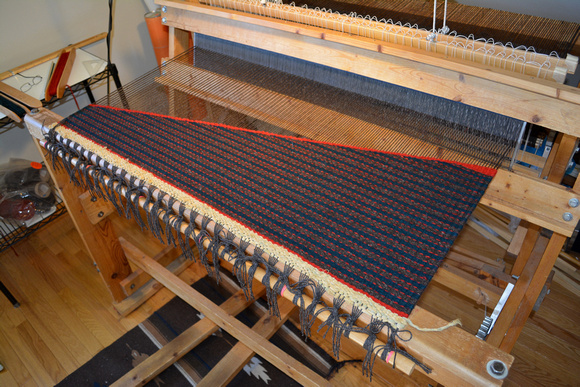 After the weaving is complete, Fred rolls it off the weaving surface of the loom, as shown below, and cuts the piece, leaving enough warp for fringe. 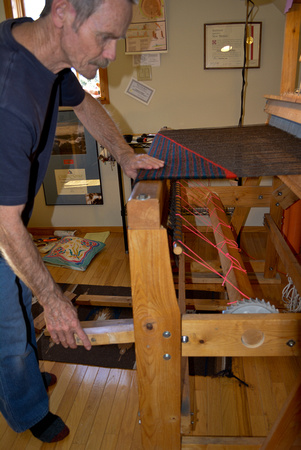 You can see that he knots the fringe to keep the weaving together.  There are 368 fringe strands and 92 knots on the finished piece.

The completed scabbards #38 and 39.  The client, who has been extremely supportive of Fred's work since his first Wool Festival, ordered two more of this style to match another he purchased last year. 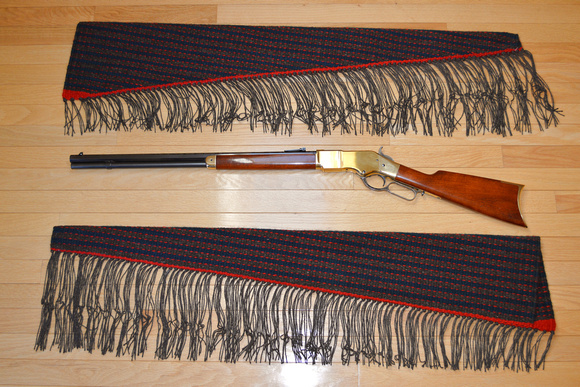 I am certain Fred would be happy to answer any questions you might have about his work.  Thanks to everyone who is in any way involved in the process from feeding the sheep to shearing to carding to spinning and dyeing the wool, and to those who purchase his work.

Steve Immel(non-registered)
This is a wonderful look at Fred's weaving process, Daryl. I learned a lot. The results of all that painstaking work are extraordinary pieces of functional art, timeless and beautiful.
Catherine Sobredo(non-registered)
Very interesting information and great images to accompany the process. A lot of patience, love and incredible talent goes into these rugs. They are all so beautiful!
Fred Barraza(non-registered)
Thanks Daryl, loved the Fred Black process tour. Excellent!!
No comments posted.
Loading...