a small study in brown

In the 2016 publication The Secret Lives of Color, Kassia St. Clair indicates that "Brown suffers in part because it is not a hue, but a shade.  It is not found in a rainbow or on a simple color wheel; making it requires darkening and graying down yellows, oranges, some impure reds or mixing together the three artists' primaries-red, yellow, and blue."  St. Clair goes on to say that brown is "inherently corrupt".  And what, pray tell, does that say about me, being a real fan of brown, particularly in food?  The shades within the shade we see as brown can be quite rich and bold.

Coffee beans are particularly interesting in their shape, color, and patina when roasted.  The trio below, from left to right, features Mexican, Yannan Arabica, and Sumatran.  The Chinese beans are very lightly roasted, whereas the Mexican and particularly the Sumatran, were roasted to such an extent that the oils come pouring through.

The white bag in which these beans are contained provides a light tent, as it were, allowing the light to land evenly on each bean. 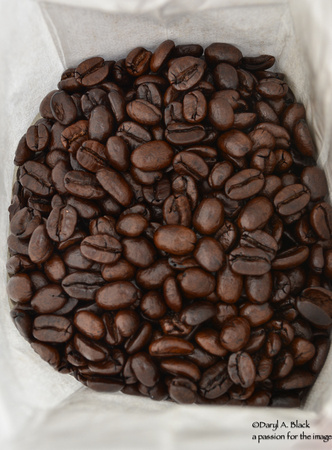 Chocolate is another fascinating food that, when rendered in various ways, lends a shine to anything it covers, such as the almonds shown below.  Reflective power was provided by a clear glass to the left of the set up.

Below is the most dear of New World foods, the vanilla bean.  The orchids from which the beans come are, to this day, hand pollinated during a relatively short bloom period.  Although I have not even seen a vanilla orchid, I thought an orchid leaf would provide an appropriate backdrop for the bean.  The brown  in the bean shown here reveals yellows and reds. 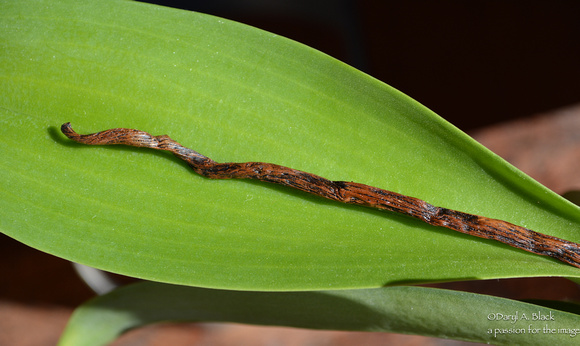 After reading the list and looking at the shades St. Clair calls browns - khaki, buff, fallow, russet, sepia, umber, mummy and taupe - my love of the hue is even greater.  And photographing it even more challenging.

Dianne James(non-registered)
I've always been fond of brown. It reminds me of a rich soil, or soil after a rain. I also like the different shades of brown, such as tan and even rusty brown. Coffee, tea, cocoa, cooked pinto beans, and roast beef gravy - all brown. All delicious. Brown is a delicious mixture of colors.

Looking at your photos, I realize I'm hungry for chocolate covered anything (almost) and homemade vanilla wafers. I'm reminded to replace my coffee grinder which I wore out grinding herbs. Perhaps an old-timey hand grinder would be good. A brown one.
Steve Immel(non-registered)
You keep finding subjects that might not attract our attention. The patina in the roasted coffee beans and the single vanilla bean are rich and somehow suggest flavor. This is another lesson in seeing the things around you and being endlessly curious. Do you have a subject in mind during the week or does it sneak up on you at the last minute? For me it's both.
Terry Thompson(non-registered)
Has to be a great color, just due to the existence of coffee and chocolate as you so correctly stated. Nice topic, click on...
No comments posted.
Loading...