if you cannot beat them...

...join them.  That was my approach this week while photographing aspen leaves.  I was able to catch a few before the breeze or wind began, but much of the time, when I wanted to photograph close-ups, the wind would be blowing, because during the autumn months in New Mexico, that is normal.  So I took a different tack to the wind and experimented within shutter priority, varying the speeds between 1/30 and 1/10 of a second.  It was interesting to see the results.  They seem to be somewhere between marginally impressionistic and totally abstract.  My process was to shoot a group of images, download them into the computer, see what worked and what was of marginal interest, and head outside to shoot again.  I did this about five times over three days with mixed results.  Some looked downright muddy and weird.  Eventually, I honed in on the idea of color, and how movement and shutter speed work to create some wild designs.

First, a shot made in the morning, when the leaves were backlit, there was little or no wind.  The second is a general aspen shot, courtesy of nature. 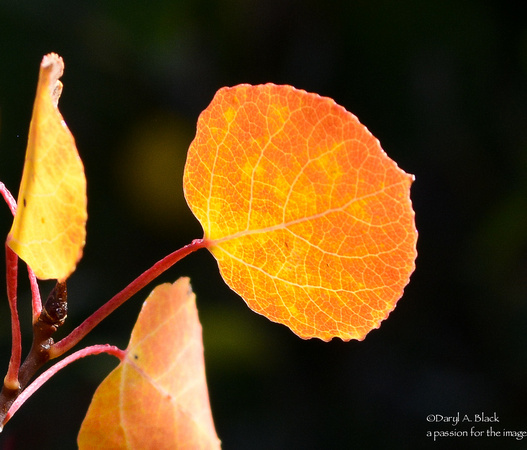 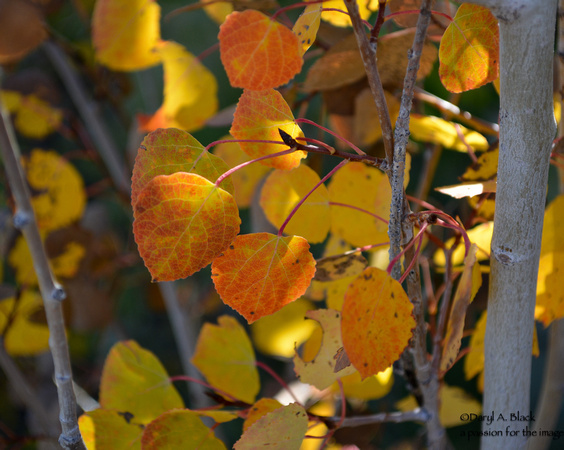 Then, I let my camera do its magic at 1/30 of second.  The small branches not only bent in the wind but the leaves flew like flags against the blue sky. 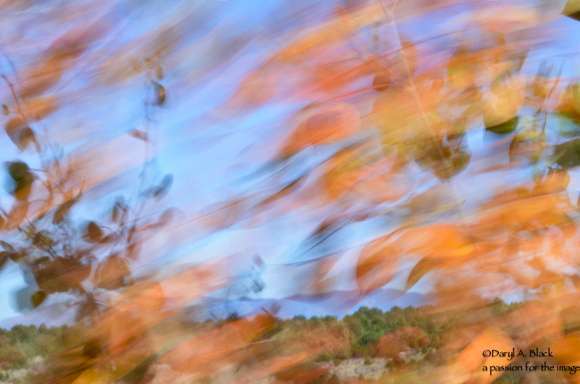 What attracted me to this image is the combination of light peach and yellow, subdued slightly by the grass backdrop. 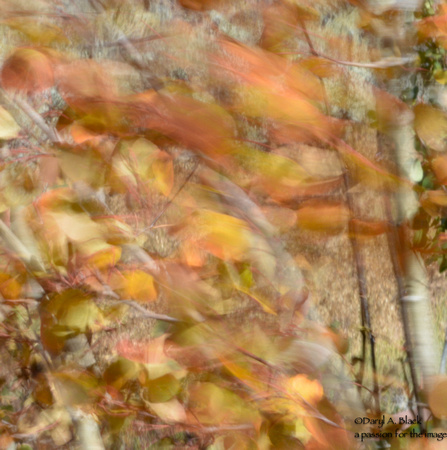 This shot was taken in early afternoon, leaving the gold very bright and dramatic, taken at 1/10 of a second shutter speed.  The photograph below that was made during the same time frame, showing a little more structure in the midst of abstraction. 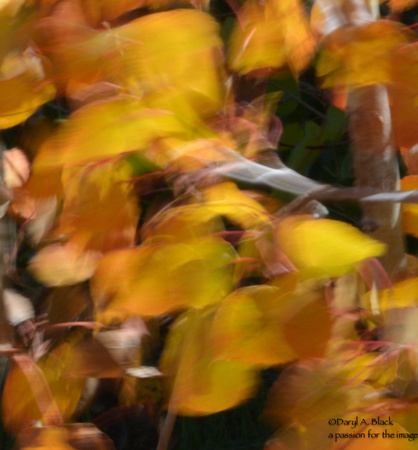 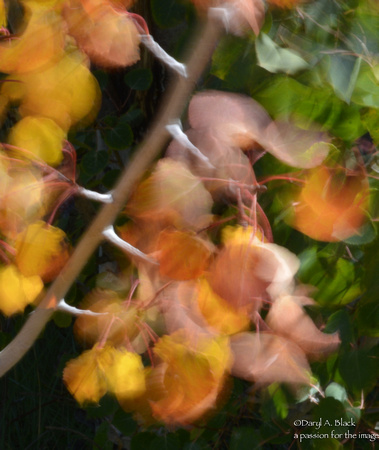 Before the deep frosts arrive later in the week, I hope to get out and do more aspen and cottonwood photography.

Thanks for going on this experimental photographic journey with me!

Dianne James(non-registered)
Daryl, after reading the other comments, I realized that they had said pretty much all (and more) that I thought to say, and I truly love Connie's comment, "...when the wind holds its breath". :)

Daryl, you really are Queen of the Aspen with your photographs. I just love them. I, too, like to do abstract art with the camera. It's amazing isn't it, the different patterns that one can get. I was planning on an outing in the mountains with my daughter today to do photography, but it's going to be pretty cold and windy, so we talked about just going down to the Rio Grande next week and getting some autumn shots. She already has a lot of beautiful Aspen photos in her portfolio, more than I have. That elusive "one" I seek just hasn't happened. I have an Aspen glade next to my house, but they don't turn as red as they do in the mountains. Temperature difference, I guess. I will have to be satisfied with the changing Blackberry leaves in my garden this year. :) It was fourteen degrees last night, here, but it's a balmy 42 on my porch at 10:30 am. Stay warm, my friend, and enjoy the changing of the season.
Wayne Gesterfield(non-registered)
Nice. I like one and three.
You could cheat like I used to do and bring leaves indoors to get maximum sharpness and detail.
I would even put some in a pan of water to simulate them being in a stream.
Connie(non-registered)
You captured the quaking well. Watching the aspen leaves quake is hypnotic. And then comes the reality of the backlit leaf when the wind holds its breath. Wind and backlit warm images are the reality of fall and slanting light this time of year. This is pleasant reality, wonderful to have at hand for a brief time...or later in your archives.
Susan Sonflieth(non-registered)
beautiful!
Catherine Sobredo(non-registered)
Beautiful images, Daryl! My preferred approach in photography embraces the impressionistic one. Oh, and those glorious golden warm colors! The last one is my favorite, although it took me a while to decide!
No comments posted.
Loading...