Call it intuition or slow knowledge combined with the weather forecast, but I suspected a trip to the mountains for an aspen photo session was necessary this week.  Given the fact that the low temperature here the last two mornings was 16 F, I am glad.  When temperatures are that cold, the leaves sometimes just turn brown, and many of them fall.  My mission was to catch them at the right time, and nature did not disappoint.  As evidenced by some of the reds and oranges below, there was a virtual riot of color at roughly 9,000 feet in the Tusas Mountains and Hopewell Lake area. 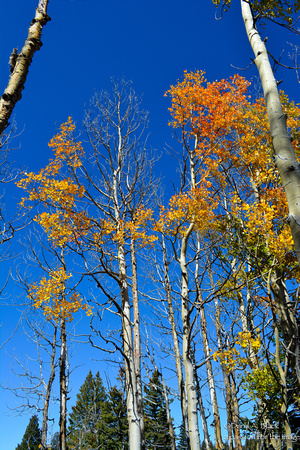 But the yellows and golds were pretty darned spectacular.  It was one of those days I could have spent the entire day shooting in the autumn sunshine and smelling the rarified air. 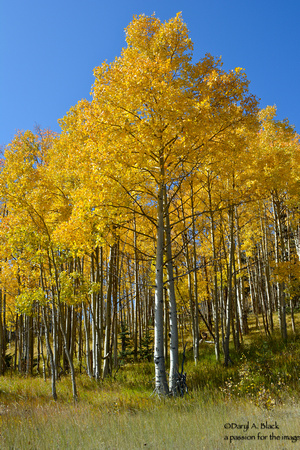 As is frequently the case, I am on my back shooting up to do justice to not only the aspen leaves but the magnificent trunks and branches that carry them. 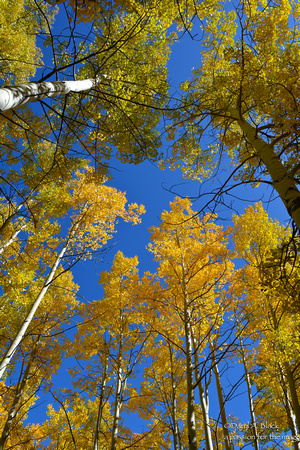 Nature- trees - aspen from the ground up

The morning backlighting of so many of the aspen was magical.  I felt like it was a forest primeval in pure gold. 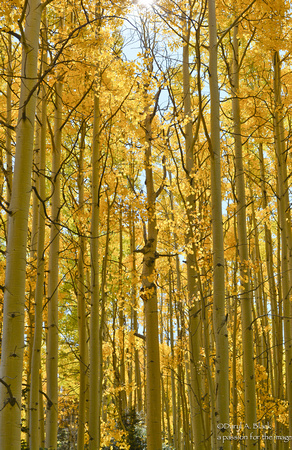 There always seems to be something I don't notice until the photographs are downloaded into the computer, which was true of the image below.  The leaf shadows on the trunk reflect the golden character of the day. 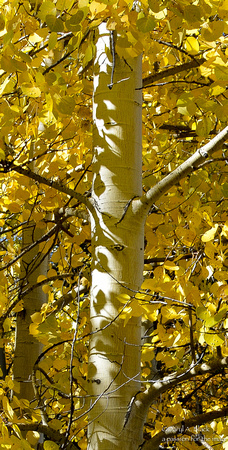 Because of the many different elevations in New Mexico, autumn, which is on its way out here,  has barely started in some places.  So I hope you have a chance to savor the season and photograph everything from aspen to cottonwoods to maples and willows around the state and beyond.  Thanks to Barbara F. R., Christina, Jean and Sam, Paule, Steve, Catherine, Lisa, Susie, Connie, Wayne, and Dianne for your comments last week.

Pauli(non-registered)
I'm liking the leaf shadow portrait best - how cool is that.

I'd read about aspens and their way of propagating into "family clusters" - here's a blurb from Wikipedia that's fascinating:
"Most aspens grow in large clonal colonies, derived from a single seedling, and spread by means of root suckers; new stems in the colony may appear at up to 98–131 ft from the parent tree. Each individual tree can live for 40–150 years above ground, but the root system of the colony is long-lived. In some cases, this is for thousands of years, sending up new trunks as the older trunks die off above ground. One such colony in Utah, given the nickname of "Pando", is estimated to be 80,000 years old, making it possibly the oldest living colony of aspens. "
xo Pauli
Lucia Ortiz y Garcia(non-registered)
Daryl, these gorgeous photos are evocative of my growing up in Los Alamos, the name which you know and is known in the Spanish, "aspen" or, alamo(s) temblon. My buddy and childhood friend, Secundino Sandoval, well known watercolor artist, still lives in Los Alamos and is known for his paintings of aspens. He would so enjoy seeing these lovely trees through your fine-tuned eye for beauty and the iconic features of our enchanted northern New Mexico. Sadly, he does not have a computer (nor wish to have one) . . . .
Steve Immel(non-registered)
These are great! Love those angles. It's pretty hard to produce something unique from the much photographed aspen but you've done just that. The leading lines especially in image three are amazing and the glimmer of blue in image four is stellar. Another wonderful set, Daryl.
Catherine Sobredo(non-registered)
I love aspens! And particularly in the fall with their mesmerizing colors and grace which you so beautifully capture! Simply beautiful!
Debra Harbaugh(non-registered)
You never cease to amaze me with you beautiful, fantastic photos of nature!!! I have been to Hope Well lake when I was a kiddo and the family went fishing there. I am now a hunter and fisher woman! I am going hunting in January 2020 in Mora where we went last year. I am so glad that I retired as it has been a fantastic year and a half so far. Take care my friend.
All my love,
Debra Harbaugh
No comments posted.
Loading...