I will be the first to admit that my journaling practice over the years has been inconsistent at best.  Frequently non-existent, with the exception of my weekly blog.  Times that baffle, confuse, sadden or anger me, like the two Gulf Wars, presidential elections, and wretched human conditions that are not addressed are the times I turn to writing.  Nothing like the present science fiction but real film we find ourselves in to make one ponder deeply.  There are scraps of paper to myself all over the computer desk with data, and dates, and thoughts from others.  The number of people living on our lovely planet at this point who remember the 1918 Spanish Flu, or being held captive during WW 1 and 2, Korea, or Vietnam are diminishing by the day.  I do wonder if we learned the lessons we needed to learn from them.  And what are we learning from life during COVID-19?  There are spring breakers who are just now returning home from the beaches of Florida, California, and the Gulf Coast who might have just learned how much they can safely drink before hurling.

My mind has been working overtime, and from what I gather, I am not alone.  Thoughts that have popped up in my brain this week, (other than the ever-present ones about the first responders, medical professionals, and scientists who are working massive numbers of hours for the rest of us to learn more about the monster) are varied, and sometimes wild and weird.  For instance, how could something that looks as beautiful through the lens of a microscope as the corona virus, be so deadly?  That is obviously a rhetorical question, but you get the idea.

Talking and hearing from several of you tells me that many artists and writers are actually appreciating the time to do their work unencumbered by "normal" life.  But I do wonder how the men and women in naval fleets around the world are coping with the pandemic.  Those vessels and people on them, may not go ashore until COVID-19 is under control.  I cannot even fathom being on a submarine for more than several hours.  Then there are the logistics and delivery people, the homeless as well as people on the border with Mexico, now closed to everything but "essential people and services", and those incarcerated. What a time!  Thus, in addition to doing photographic work, I have begun journaling again, doing online research, and generally trying to make sense of what is happening.

Astronaut Scott Kelly has written some good pieces about life aboard the International Space Station.  It is all about keeping structure, having a schedule, and doing work. If you are an artist, you already use some of these tools.  Many of you are gardeners and also use those tools, in full preparation for spring planting, as March continues to present itself in all its glory.  As several different varieties of sparrows who summer in the sage create a mating concert, and other seasonal birds arrive, the wind blows during fleeting storms complete with thunder and lightning, that drop rain, graupel, and snow on the mesa.

I was lucky enough yesterday morning to shoot photographs of a previous night's moisture in many forms on our roof windows.  These things are very time specific.  One has to catch them before the sun shines on the windows and melts the image.  It appears that the graupel packed down at the bottom of the window before other moisture settled and froze on top of it.  I shot some of these while squatting beneath the window, and others while lying on the floor. 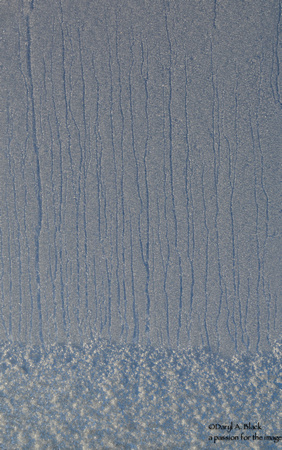 graupel and ice drift on window 3 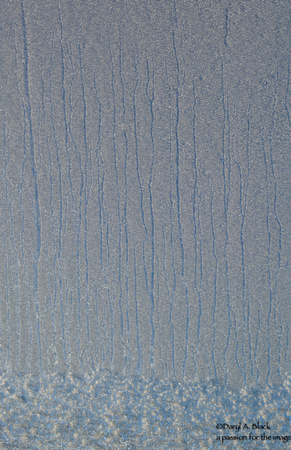 graupel and ice drift on window 2 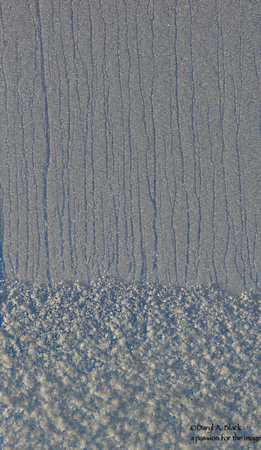 graupel and ice drift on window 1

It just seemed appropriate to turn one of the shots horizontally, which made the ice look like a weaving. 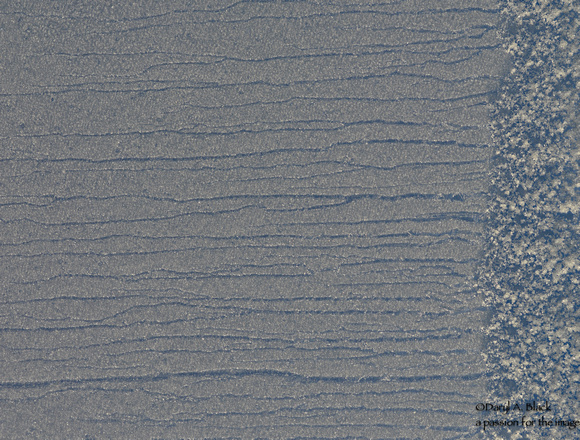 graupel and ice drift on window 4

Thanks to Veronica, Donna, Lisa, Debra, Geula, Elida, Steve, Barbara, and Victoria for your comments this week.

Spring has arrived in Scottsdale with no toilet paper.
Anybody have some old Sears catalogs?
Steve Immel(non-registered)
Just as I have been thinking about abstracts you got on my wavelength with these subtle gems of rivulets of ice and thaw. It must be ESP. A good test of an abstract, I opined to some buddies, is that it makes you wonder what it is. These do that. They are also all about patterns and composition, another test of a successful abstract. In this case even if I didn't know what I was looking at the forms would be enough.
No comments posted.
Loading...