With the compression of time, the pandemic, and all the other strangeness that continue to mark the year 2020, my recall of specific years and time is less than stellar.  Given that, some three to four years ago, Fred and I had finished our workout at the GCCC (Genoveva Chavez Community Center) in Santa Fe, and outside in the parking lot was a mini-display of assorted electric vehicles, including several Nissan Leafs and Chevrolet Volts and Bolts.  The charging bays at the center were being touted along with the possibilities of electric cars and solar electrical generation in general.  We had the opportunity to view and sit in the vehicles, and talk to owners.  Up to that point, Teslas, although not entirely rare in Santa Fe, held a "wow" factor.  We always stopped to talk with Tesla owners about their vehicles.  Now there is a huge stable of Teslas in Santa Fe, but regardless of the type of electric car, people who buy and own them adore their electric mode of transportation. Many say they will never own an internal combustion engine or ICE, again. One of those reasons, for many, is that you don't need to go to the gas station. Charging stations, yes, on a road trip, and those are becoming more and more common.  Matter of fact, the Santa Fe Community College will soon have charging stations on campus, as well as electric car servicing as part of their School of Trades, Advanced Technologies, and Sustainability program. The technology - particularly battery technology to increase efficiency and driving range - is going through an incredible and rapid evolution.  We are happy to see faculty and students at the community college involved in the process of working with alternative energy on many levels.  It is a real boon to the city and state. 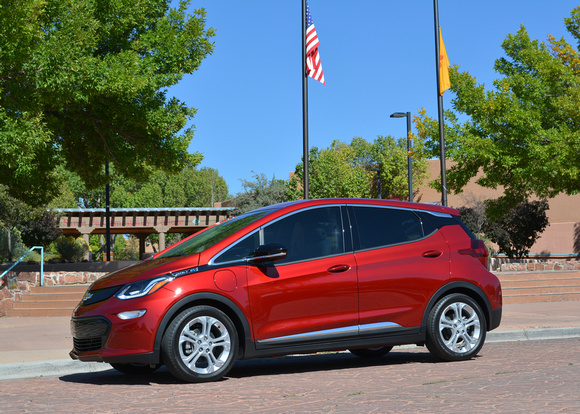 Because National Drive Electric Week began yesterday and runs through 4 October, I thought it would be a good time to again visit solar energy production and electric cars.  There is a massive amount of information online about electrical vehicles.  One source we have been reading for years is Green Car Reports. https://www.greencarreports.com  It is a pretty complete summary of a the daily news about green energy, cars, and emerging technology in America and around the world.

When people go car shopping at a dealership, you generally sit in the vehicle, look at the features, kick the tires, and check under the hood.  Looking under the hood of a Chevrolet Bolt, for instance, Fred's first comment was "I don't see much in here I recognize".  Three fluid reservoirs - windshield wipe fluid, brake fluid, and coolant - are obvious.  But what the heck is the rest?  Well, since electric cars are almost computers on wheels, there are many electronic components along with the wires that connect them.  Under the hood of the Chevy Bolt show below, there is a total of eleven moving parts. 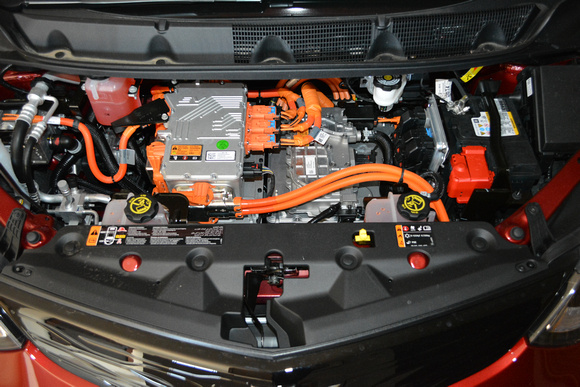 One adaptation the automotive industry has made is to offer both 120 volt and 240 volt charging technology in an owner's home.  Known to electricians as 110 and 220 volt, one offers a slow charge from a standard electric outlet, and the other, 220, can charge an electric car more quickly from a standard drier outlet.  "Quick charge" stations are located along major highways in the country.  Here is the Bolt EV charging port and charger. 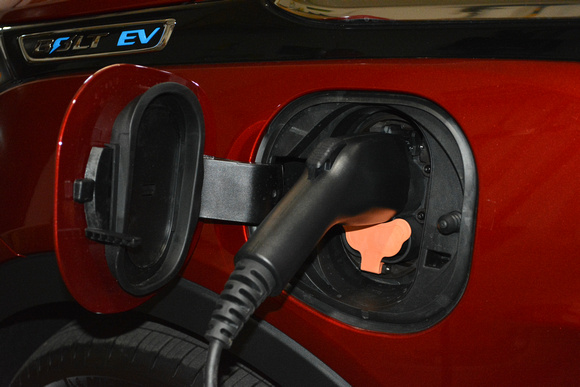 Fellow photographer and friend Terry Thompson recently purchased a Nissan Leaf, and is equally excited about it.  It is called Leafy and pictured below.  He also is producing "front" license plates, for those of us who don't sport license plates both on the front and the back of our vehicles.  You can contact Terry about getting a front plate from his "Personalized Plates for New Mexico Fronts" and see his amazing photography as well at his business website: http://www.TerryThompsonPhoto.com 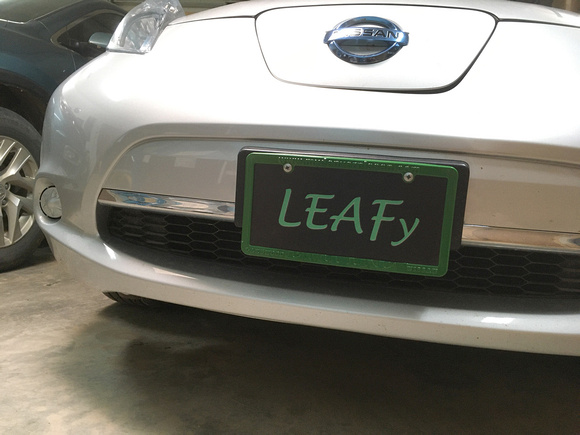 Thanks to Barbara, Marilyn, Luella, Debra, Sara, Wayne, Paul, Steve, and Jean and Sam for writing this week.  Happy Birthday this week to Earle W. and Kelly S.

Ingrid(non-registered)
Thanks for the interesting car photos and food for thought!
Terry Thompson(non-registered)
Great blog Daryl, nice to talk to you yesterday. And in the EV department it is a new learning experience as you and Fred have discovered. Maybe when I can't sleep at night I should just go curl up in LEAFy with the owner's manual and continue my education. Thanks for including me in the blog. Took the CRV into town today to gas it up for any longer trips that might be pending. But day to day our 100 mile limit gets us to and back from town 3 times. Until today I hadn't been to the gas pumps for over a month. It's a new world. TT
Catherine Sobredo(non-registered)
Highly interesting blog accompanied by inviting images! Thanks Daryl!
Wayne Gesterfield(non-registered)
Funny you should do a blog on this today.
I've been looking at the Tesla for years.
We have a Tesla showroom at our mall.

I just finished looking at the Lucid online.
A bit beyond me. But it really looks nice.

I will seriously consider a Tesla for my next car.

However, I will miss the sound of a gasoline engine and the rumble out the tailpipes.
TTT(non-registered)
Excellent and engaging summary of current electric car info. You gotta love Fred’s response to the unfamiliar engine! My dad, 1950-70s detroit-car dealer, responded similarly when he opened the hood of my shinny new 1976 Honda Accord. Yeah, your photog of that electric car engine is smancy slick!!
When you kids getting yours?
No comments posted.
Loading...