signs of the times

Since the New Mexico 60-day legislative session and special session to consider the legalization of recreational marijuana (the bill was signed into law on 12 April 2021) are over, I thought it might be time to see if there were any changes around the Capitol Building.  The last cruise by was literally that, since there were barriers, fences, and National Guard troops surrounding it after the 6 January riot in Washington, D. C.  It was pleasing to be able to once again walk around the building, and see the giant seal of the great state in all its glory.  The Roundhouse, as it has been affectionately dubbed, is still a wonderful building, with the main doors facing east. 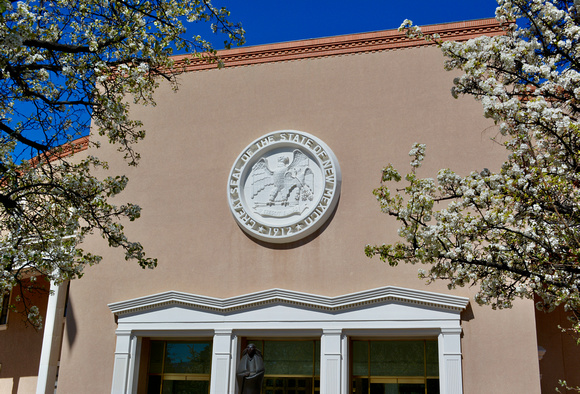 But there were a few signs that the times had changed just a bit, including on the beautiful east doors of the building, plastered with paper signs.  The doors remain closed because of the pandemic. 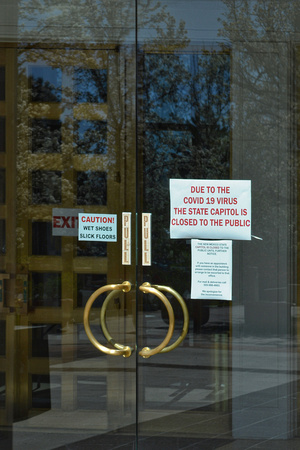 Security cameras, including a mobile, solar powered unit with four different cameras and a bull horn on it, are now everywhere.  I suspect I was on footage from a variety of angles.  In addition to the security cameras, this wonderful bronze spirit "Morning Prayer" by artist Allan Houser (Chiricahua Apache), serves as greeter. 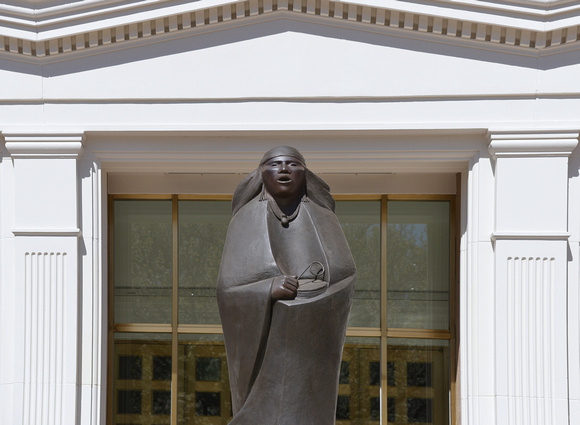 Across the street at the PERA building, the American and P.O.W. flags were flying high in the breeze below the Zia symbol, creating a reflective collage. 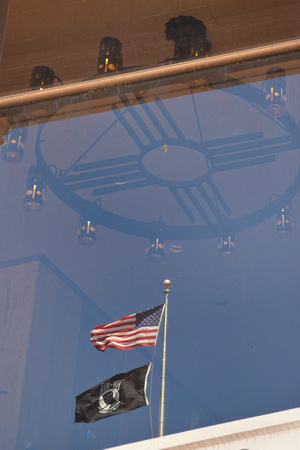 Just for fun, I walked down Old Santa Fe Trail and shot photographs of two different convex mirrors in place to help drivers view traffic coming into the downtown area. 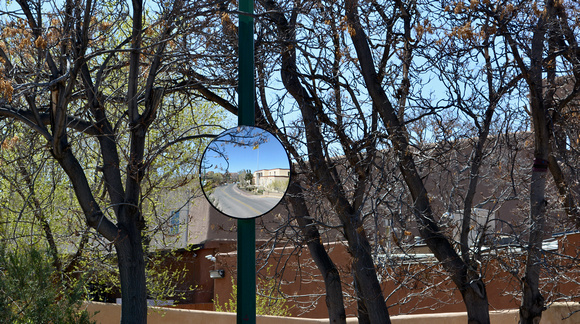 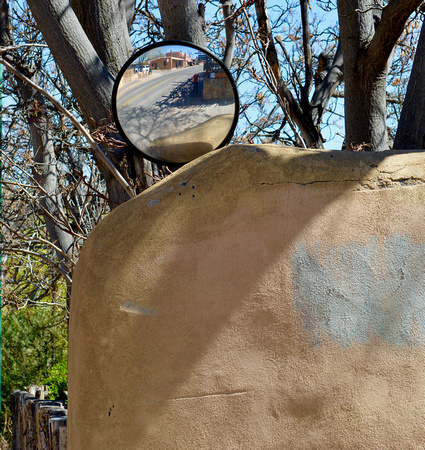 And finally, a definite sign of the times is the Charge Point DC fast charge or standard AC charging unit across the street from the Capitol Building for charging electric and plug-in hybrid vehicles.  It appears that the last vehicles to use it were a Chevrolet Bolt and a Nissan Leaf.  Enough geeking. 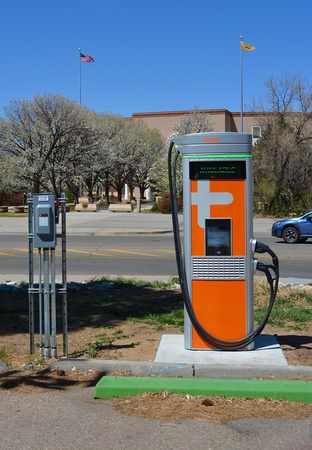 Thank you Claudia, TTT, Jean and Sam, Karla, Barbara, Marilyn, Lawrence, Dianne, Steve, and Sara for writing this week!  As always, you words are always appreciated!

Claudia(non-registered)
Good eye! Things that I would have missed. And I miss Santa Fe.
Ingrid(non-registered)
Interesting details of the Capitol area which are easily missed by a non-photographer's eyes.
Wayne Gesterfield(non-registered)
Nice to walk down memory lane with you.
We miss Santa Fe.
TTT(non-registered)
Loved the capitol tour through your lens. surprising that compels has fast charge. Wow. NM is on the cutting edge! burning question - how did you know which car used the fast charge?
Steve Immel(non-registered)
The last time I drove by the Round House was just after the January 6 insurrection and Paseo de Peralta was crawling with police cars. It was a chilling time in the so-called United States. I use 'United' loosely.

I'm fascinated by the low tech signage on the Round House doors. You would think that the seat of government would do a professional job of denoting closures and restrictions. Can you imagine how advanced those signs would be if it was an Apple Store? It raises the matter of Excellence or the lack thereof.

I think the American and POW flags beneath the Zia symbol are very effective. And I like how you used the convex mirrors to show Old Santa Fe Trail. Reflections are great photographic devices.

I'm glad you're out and about.
No comments posted.
Loading...