Wedding photography is something I love.  Organization, creativity, socializing, events, costumes and fashion, communication, weather, and the continued learning of technical processes are all involved.  With friends from tango marrying at the Leaping Deer Ranch near Sapello, I was lucky enough to be able to do some shooting.  Despite the fact that I had just received my second jab the day before and I wore a mask, it worked.  The bride and groom had attendees taking photographs and downloading them in real time on an app - The Guest.  I am anxious to see those.  It sounds like a great and spontaneous way of sharing photographs on the spot, and is yet another new chapter in wedding photography.

But at this point, I will share a few of the photographs I took here with my trusty Nikons.  Most were taken with my 70-200mm lens on the D800.  But the group photographs needed the 18-55 mm lens on the D5200.  As a general rule, I consider the time of the wedding, predicted weather, and the desire of the couple as far as photographs are concerned, and do presets on each camera.  Things happen quickly at weddings and the idea is NOT to need a reshoot.  The photographer's worst nightmare and I have seen it happen.  It was certainly a cautionary tale for me before I began shooting weddings in earnest.

Although my mission was to shoot more of the traditional type of wedding photograph, but it doesn't mean they can't be fun.  In this case, the fun was already provided by the bride's father in full regalia. 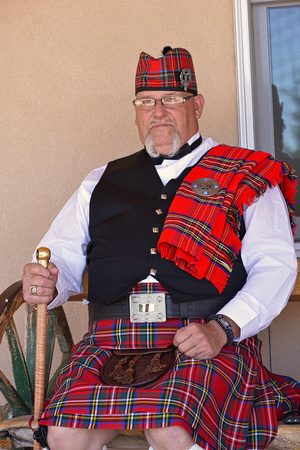 While shooting the binding ropes between the groom and bride, I had a sneaking suspicion something compelling would happen and it certainly did. The number of hands involved in accomplishing the task made this a unique photograph.  Each hand seemed to have its own agenda. 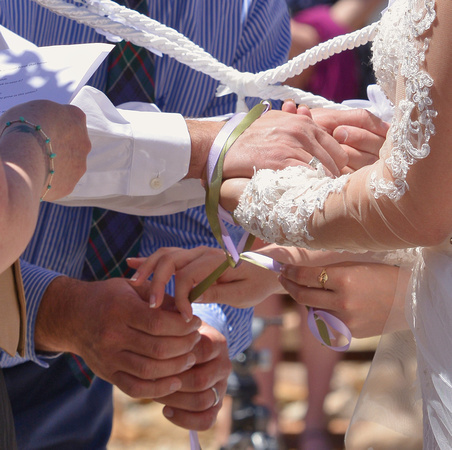 In addition to the focus of the groom while reading his vows, the inadvertent "ink" rhythm on the arms of both the bride and her maid of honor adds interest to the scene. 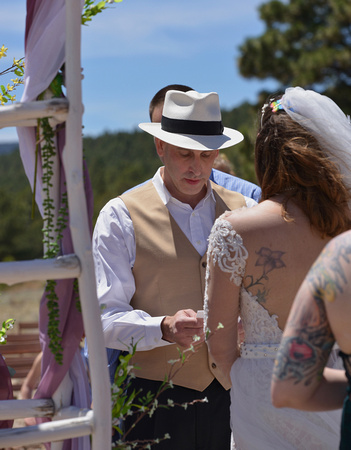 More traditional in scope, the photographs below of the bride and groom separately and then together, demonstrate what a fine background a stucco wall is for environmental portraiture. 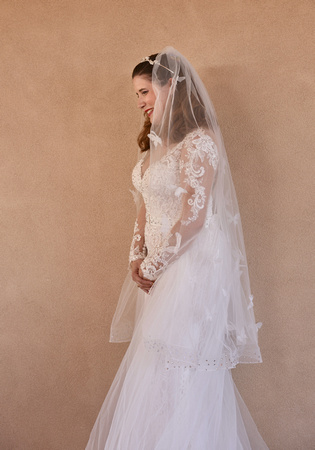 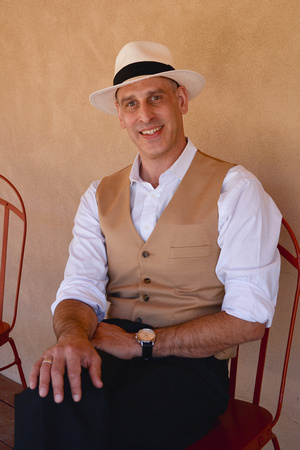 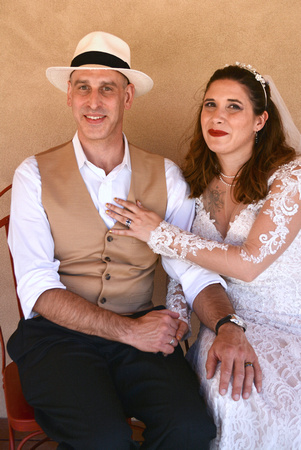 Many thanks to Jessica and Joseph for allowing me into their wedding day.

Ingrid(non-registered)
What a treat to see beautiful wedding photos in these times! It looks like it was a lovely day as well. Happy photos and great work Daryl.
Anne(non-registered)
Love a burly man in a kilt!! The bride and groom were nice too.
Steve Immel(non-registered)
You're in your element, Daryl. Like Catherine, I got a kick out of the tangle of hands. I didn't know about the "binding ropes." There meaning is evident though. It's interesting that other hands are involved. What do the helping hands signify? It must be a Scottish wedding tradition. The bride's dad was an imposing guy. He took himself pretty seriously. The overlapping body reveals something about the bride and her coterie; age, generation attitude.

Was the traditional approach directed by the bride and groom or was it based on reading the couple? Anyway it's good to see the faces revealed.
Wayne Gesterfield(non-registered)
Wow, such great pics.
Catherine Sobredo(non-registered)
Beautiful images as usual Daryl! Love the hands!
No comments posted.
Loading...