There are places in the world, even in the northern hemisphere, where color doesn't wain during the winter months.  Many flowers are in bloom, even as I write this, in California, Hawaii, Oregon, and Washington, as well as coastal Canada, in the southern United States and Mexico as well. Parts of the Mediterranean have myriad flowers that provide winter color in the region.  Having grown up in New Mexico, however, I never saw a winter flower (outside a building, florist's shop, or nursery) in bloom until I was 21 and in California, visiting my future husband and his family. To say I was blown away by seeing all the glorious flowers in winter is an understatement.

A bit of history is necessary here.  Thanks to the intrepid and peripatetic Portuguese, a big, brash winter blues-bashing flower appeared on the scene in Europe, possibly as early as the 16th century.  The amaryllis, native to South Africa, with its varied colors and patterns, became wildly popular, was hybridized and tweaked, and went on to brighten homes in Europe and the wider world.  Appropriately, the name amaryllis is from the Greek "amarysso" which means "to sparkle".  A great many names are attached to it, including Christmas Lily, March Lily, Madonna Lily, and St. Joseph's Staff.

After the first bud of our amaryllis opened some five days ago, my camera was in hand, right through the unfurling of the fourth bud.  Each day, I would put the pot in assorted and different pools of natural light - both inside and outside the house - during different times of day and with different back grounds.  Here is a sampling of the 100+ photographs I shot over the week.  The computer mouse was a little worse for wear, as it gathered flour, bread dough, and dirt remnants on it between shoots.  Here is a shot of the first flower to open.

The throats and backs of the flowers have their own beauty,  as shown in the photographs below. 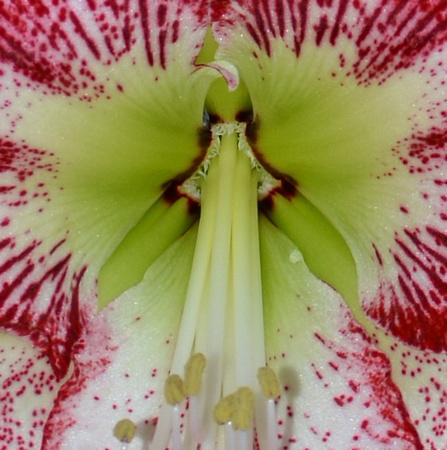 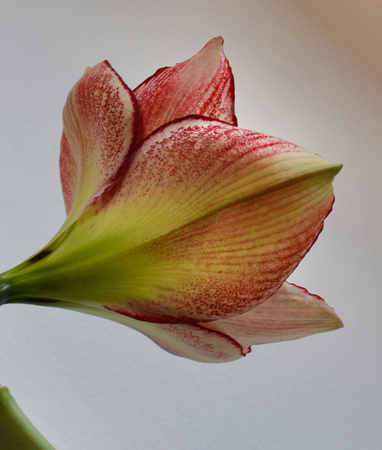 In this shot, I held a flashlight to bring added light to the interior of the bloom. 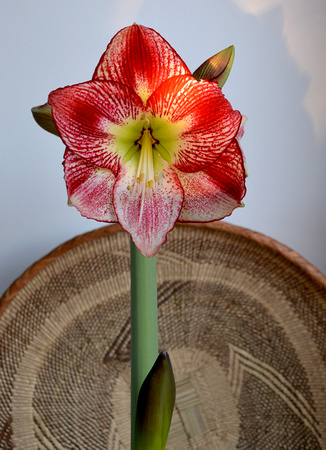 A second bud is ready to open in this botanical. 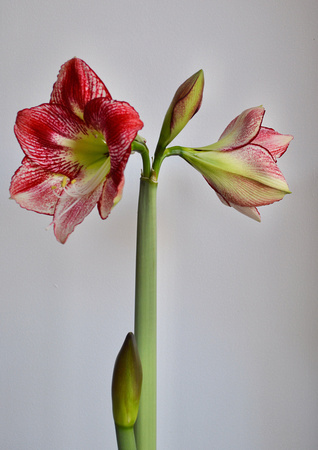 There were two flowers open at this point, but I focused on one in order to give "The Kiss" by Gustav Klimt, room to breathe. 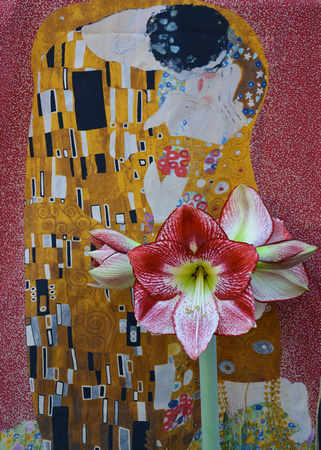 Afternoon light saturated the colors of the amaryllis in its full glory. Thanks to Ingrid and Robert, and to Barbara, Christina, Lisa, TTT, Sara, Wayne, Jean and Sam, Steve, Catherine, and Dianne for contributing to my blogs!

Ingrid(non-registered)
Beautiful combinations with the basket and "The Kiss" in the background!
Connie Taylor(non-registered)
I was gifted an amaryllis bulb for Christmas so it is now green leaves and a promise to grow tall and splendid. The photos are stunning but your energy and delight in the capture shines through the images.
Steve Immel(non-registered)
All of these are very painterly, Daryl. In fact, the first one looks more like a watercolor or a pastel. Is that the nature of the amaryllis or your lighting.? Are you doing something different? Either way they're magical. I agree that the throats and backs of the bloom have their own beauty. I like the basket as a backdrop for images one and four very much. Your use of the flashlight brought a wonderful vitality to image four, too. Nice touch with the Klimpt and the "mouth" of the amaryllis.

A lovely set, indeed.
Ann Alexander(non-registered)
Having blooms in midwinter seems like cheating. Nevertheless, I love it. Your photographs are EXQUISITE.
No comments posted.
Loading...