Today is the last blog of January 2022, demonstrating, once again, how days and weeks and months seem to be compressing, leaving me wondering how days disappear into thin air.  But it is January and winter in the northern hemisphere.  A flurry of cloud activity painted across the sky mid-week, hinting at the possibility of snow, and providing dynamic photographic possibilities.

Most of the clouds forming were of the cirrus variety in the higher atmosphere.  All I knew is that they were on the move and I had to grab my camera to catch them as they moved from the eastern sky, tracking across the north to the west and then south.  Nearly every variety of cirrus clouds was on display. 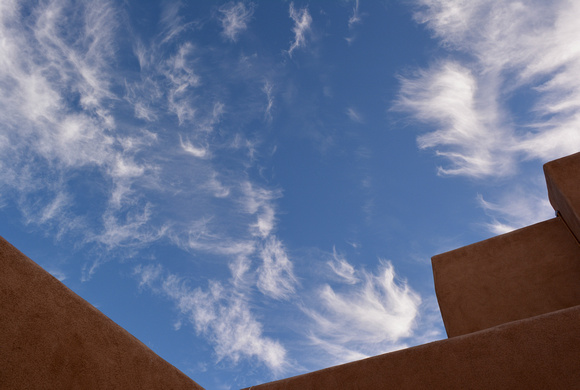 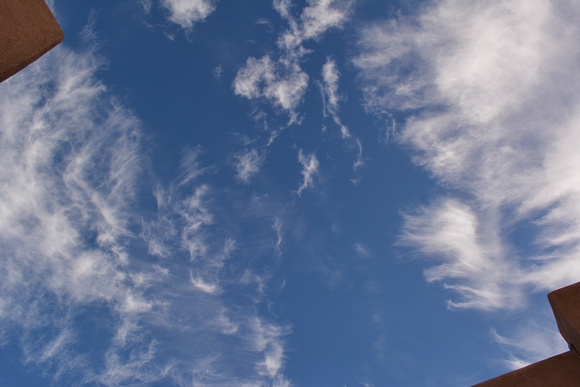 Although the color of blue skies and feathery clouds framed by the building walls is brilliant, I liked the idea of taking one image to black and white. 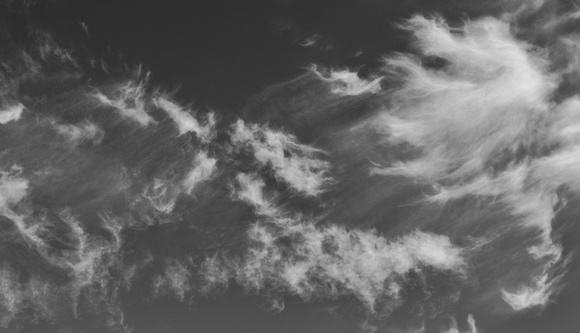 Once again, I felt compelled to use the sky as backdrop for the second bloom stalk of the amaryllis. 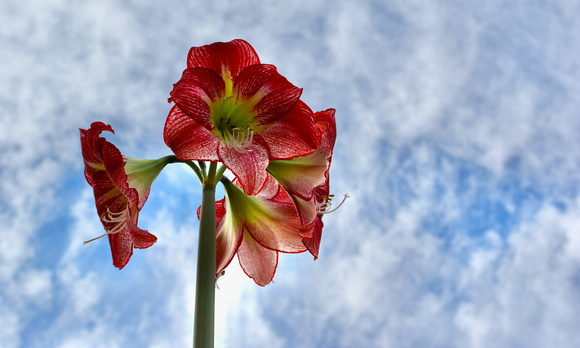 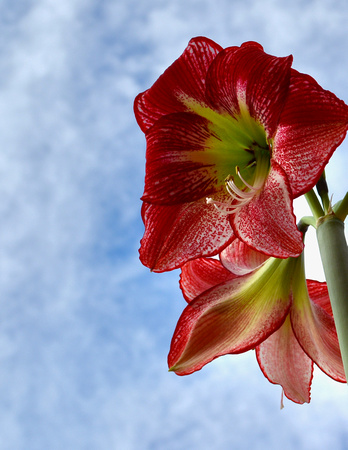 After the wind, it did eventually snow.  Six inches in some parts of Santa Fe.  Our total was 2-4 inches,  measuring .21 in liquid after it was melted.   Here is a shot of the entire bloom stalked against snow, with blue tinges on the right side and pinkish on the upper left where the sun was beginning to reflect off the stucco wall. 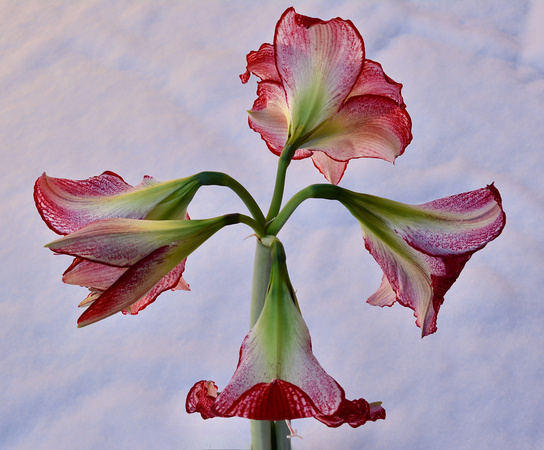 I hope the skies wherever you are allow for some fascinating watching and photographic experimentation for you this week!  Thanks to Barbara, Char, Lisa, Paule, Wayne, Sandra, Pauli, Christina, Barbara O., Steve, Jean and Sam, Catherine, Veronica, and Dianne for getting in touch this week.  And Happy Birthday, Connie!

Steve Immel(non-registered)
For starters, nice framing of the first two sky images. And thanks for the wispy black and white, almost abstract one. The sky is an apt backdrop for the amaryllis. The light and contrast provided by the blue sky makes the flower really pop. While the snow is more muted and the cast ranges from pink top left to blue for the balance of the photographs. I wouldn't have noticed that without your excellent text.

Another lovely offering, Daryl.
Wayne Gesterfield(non-registered)
You and I have a love for cloud pictures.
No two the same.
They can look so soft and graceful, or menacing when they want to give us rain or snow. .

Nice amaryllis, I like the second to last the best.
Lawrence Jones(non-registered)
Gorgeous juxtaposition of flowers, sky and clouds.
Ingrid(non-registered)
Love the Amaryllis reaching for the sky!
Victoria(non-registered)
The sky was an interning backdrop for the flowers!!! Fast shutter speed?
No comments posted.
Loading...