Fully realizing that those of us living in New Mexico have been nearly irrevocably spoiled by the weather this year, the past week brought winter to the fore in a big way.  With low temperatures on Thursday, Friday, Saturday, and Sunday mornings of 0, 4, 9, and 16 degrees Fahrenheit, and high temperatures below freezing for four days as well, my brain craved warmth.  A few places make me whimsical about it, but one location in New Mexico - El Malpais National Monument near Grants - just says warmth.  Massive volcanic lava flows from nearby Mt. Taylor cover the area, making it actually hazardous and exposed in the summer.  But above the flows are sandstone formations that hold their own warmth in solidity as well as color.  Below, a lone Ponderosa pine is fed by water that falls into and is held by crevices.

One of the more notable features of the area is La Ventana Arch.  I could spend a great deal of time photographing every detail of the arch.  The shot below is a bit of an illusion, as the arch is in the foreground and blends into other formations behind it.

Holes and possible future arches can be found on both sides of the arch.  As the sandstone weathers, holes are created while other areas are varnished and smoothed. 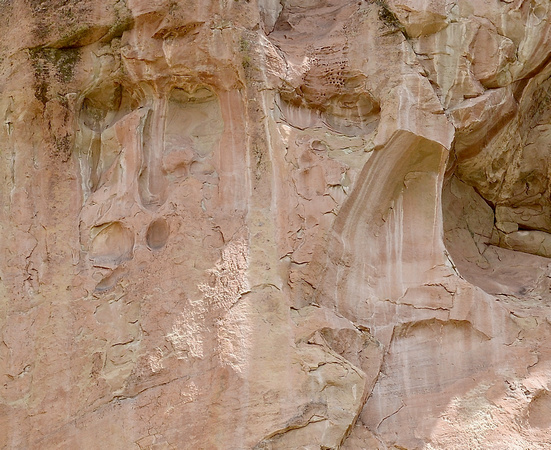 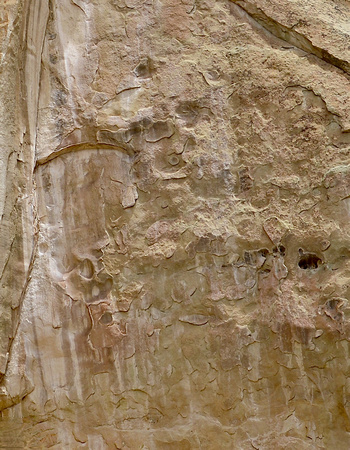 The vertical wall on another side of the arch shows spectacular shades of desert varnish on the stone. 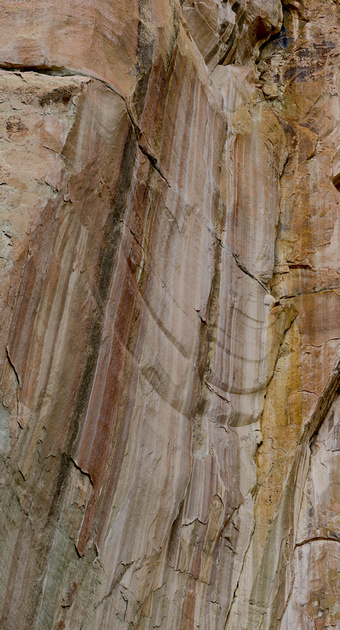 El Malpais National Monument is roughly 72 miles west of Albuquerque off of Interstate 40 near Grants.  All trails are open but the visitor center is closed on Tuesdays and Wednesdays, and the caves on the west side of the monument are closed for a long deserved rest (the National Park Service calls it "resource protection and public safety").

Birthday wishes to Sue P., Luella, Barbara O., M. Fred, and Diane D., and Happy Anniversary to Gigi and JJ, and Susie and Bogie, all celebrating during the month of February.

Ingrid(non-registered)
New Mexico: A place like no other. Daryl you really captured it so well in this Blog and always. Thanks
Pauli(non-registered)
Love the zori haiku.
Had to look up Malpais: [noun] rough country underlain by dark especially basaltic lava : badlands. Exactly.
Fascinating dramatic images and surfaces - thank you.
Dianne James(non-registered)
I so enjoyed seeing your sandstone photos. I just marvel at what time, moisture, and wind have sculpted there. I also marvel at how you just capture the images in such a dramatic way. Thank you for sharing! It will be warmer, soon enough. Having lived around that area, I do miss the terraine. There's a lot of snow on the mountains, here, thank goodness- I was beginning to worry, it's been so dry. Hugs to you both. Much love.
Charlie Kalogeros-Chattan(non-registered)
beneath swaying palms
plastic flamingo's snapped neck
big wind in Baja

(back at you)
Wayne Gesterfield(non-registered)
Daryl, talk about getting cold feet.