intersection of DC and AC

These blogs, like the weather, seem to feature things that come together gradually or collide, like warm spring days and winter snow squalls in March here in the Rocky Mountain west.  Bright blue skies were slowly replacing the overcast that brought a lush, wet snow to the landscape as I began writing Sunday morning.  Those with passive solar homes or with homes receiving energy from solar panels count on that bright sunshine for peak warmth and efficiency.

Our modern electrical systems evolved thanks to the discovery and development of what is called direct current or DC power, and alternating current or AC power.  I don't pretend to have much comprehension of either, but having lived off-grid with a photovoltaic system for twenty years, I have learned a few things.  Since my intellectual capacity leans more toward memorization than technical understanding, I know the wattage of just about every appliance in the house.  How they work?  Well, bits and pieces take hold from time to time.  One is that DC energy or direct current is a one directional flow of electrical current.  We use many things in our daily lives that are powered by DC including cell phones, laptops, flashlights, and any kind of tool or implement that uses a battery.  AC or alternating current is what we use when we turn on a light or an appliance in our homes.  It literally alternates or, according to Wikipedia "reverses direction and changes its magnitude continually..."

During the 1800s, numerous inventors were working on these strategies for energy production and communication, including Guglielmo Marconi, Alessandro Volta (his battery was the Voltaic pile), French physicist Andre' Marie-Ampere, Nikola Tesla, and Thomas Edison, to name a few. Two ironies emerged from the competition for electrical transmission in the United States between Tesla and Edison.  Ultimately, the nod for what we now call "the grid" , was given to Tesla who promoted AC.  However, the Tesla automobiles are based on DC energy, intersecting with and changed into AC to run Nikola Tesla's AC brushless induction motor.  Although Thomas Edison helped develop and promote DC energy, many of the power companies in this country are named after Edison, despite the fact that they use AC.

And what does all this have to do with me and photography?  Not a whole lot, except that I photographed the technicians and equipment from Positive Energy Solar as they installed two Tesla  Powerwalls this week in our garage.  Because of that delicate intersection between DC and AC, the process was actually more complicated and took longer than the original installation of the solar panels on the roof.  But the completed process would fulfill our plan to have a backup system in the event of an extended power outage in the area.

To begin the job, organization is the key, as the photograph below demonstrates. 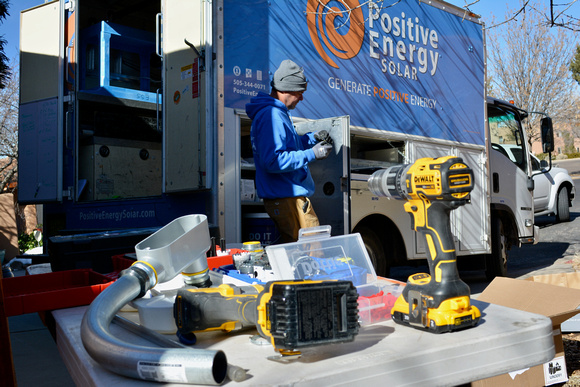 The first day was spent installing new circuit breaker and shut off boxes, both in the garage and outside, in preparation for DC and AC joining together. 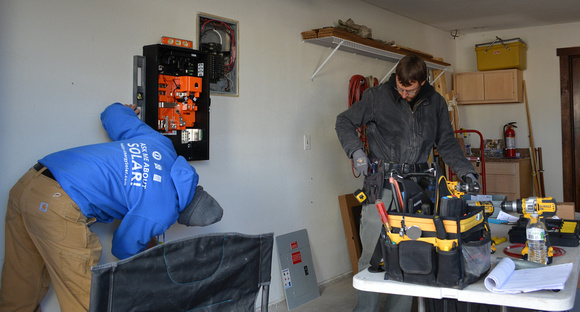 On Day Two, the Powerwalls made their debut. 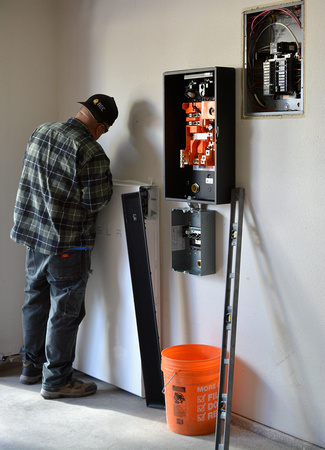 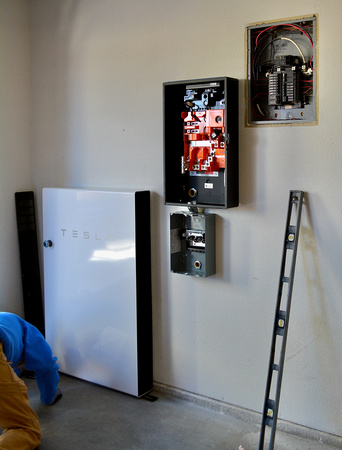 Powerwalls are two rather hefty solid state batteries, a variation of the types of batteries used in electric automobiles.  At 300 pounds a piece, a dolly and muscle was required to maneuver them into place.  The Powerwalls are made to fit together front to back, taking less space wherever they are installed. 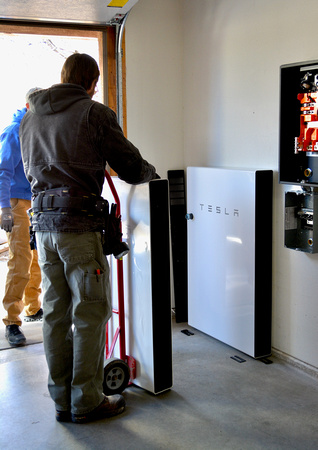 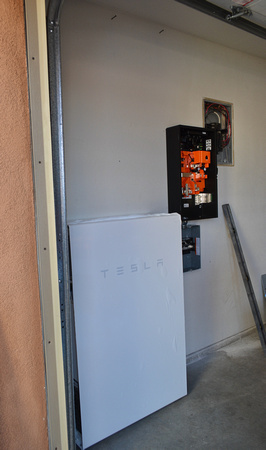 It takes teamwork to do a great job, and they did! 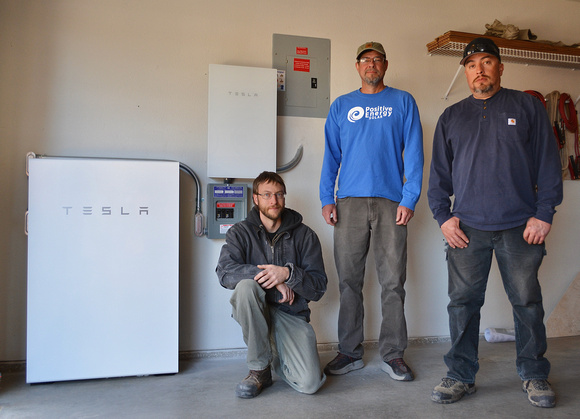 It was like Christmas morning having these beauties installed and being able to read real-time energy production, use, and savings courtesy of an app.  One of the other bells and whistles are these Steam Punk green lights that pulsate when the batteries are charing. Probably a frivolity but we definitely get a giggle out of watching the lights. 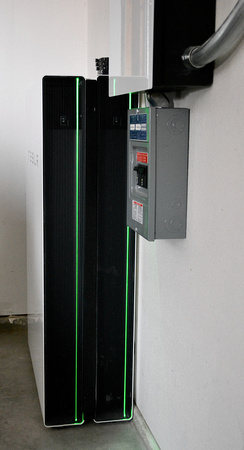 Thanks for your indulgence as I tried to put into words and photographs a small example of the intersection of DC and AC.

Steve Immel(non-registered)
Now you own a Tesla. This was a fun and educational read, Daryl. And it's the trim, tidy and functional installation we've come to expect from the Blacks and Positive Energy Solar. You are to be congratulated for walking the solar walk you have been doing so for more than 20 years starting on the mesa. Your tight ship is an inspiration to all of us luddites. Until now I couldn't have explained AC versus DC if my life depended on it. Keep the lessons coming.
Wayne Gesterfield(non-registered)
Yes, very neat.
Enjoy your new found freedom.
Power to the people.
Connie Taylor(non-registered)
As a fellow off-grinder for 30 years and current (pun intended);user of auxiliary solar, I applaud you and Elon Musk.
TTT(non-registered)
WOW!!!!!! So interesting and so cool and so forward thinking, you kids — forward thinking. Keep explaining and educating us, Please
No comments posted.
Loading...