Everything in nature is cyclic.  Growing things abide by their own cycles, and in many cases, the beauty of the cycle is demonstrated only once or twice a year.  So when spring presents photographic opportunities once a year, as is the case with flowering fruit trees, it becomes a priority for me. Throughout the past month, I have been photographing flowering fruit trees in private homes, in the Rivera Memorial Gardens, and at the Santa Fe Community College.  Although I am unable to identify a good many of them down to the Latin genus and species name, there seems to be an abundances of apples, crabapples, and flowering plums, which all seem to thrive here.  I had asked the owners of a house with gorgeous trees if I could photograph them and they were gracious enough to say yes.   Shown below are flowers of what I believe to be a weeping crabapple, with a stunning caramel-colored bark that makes the tree flashy year-round. 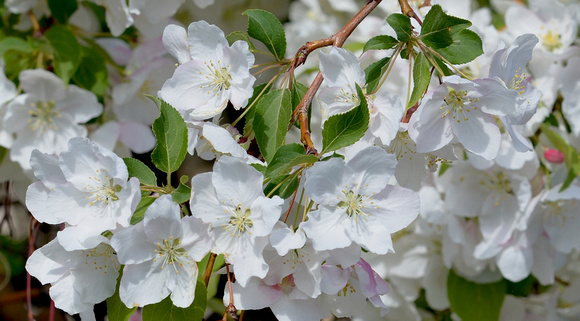 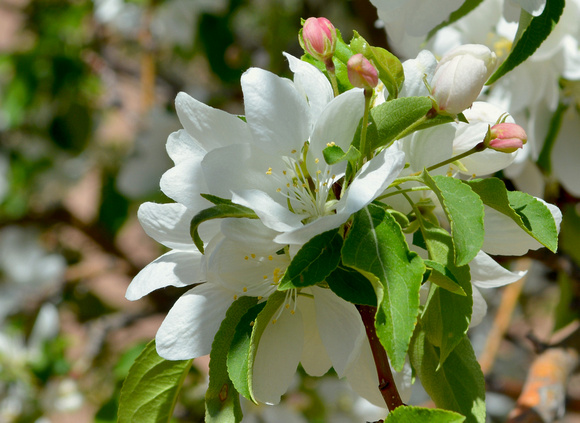 When I walked into a grouping of three trees in an open space, I noticed a din and originally thought it was traffic noise.  But tuning my ears, I realized the trees were full of bees and the sound they were making was fascinating.  With that many blooms to be worked, I knew there would be a photo bomb or two, as happened in the image below. 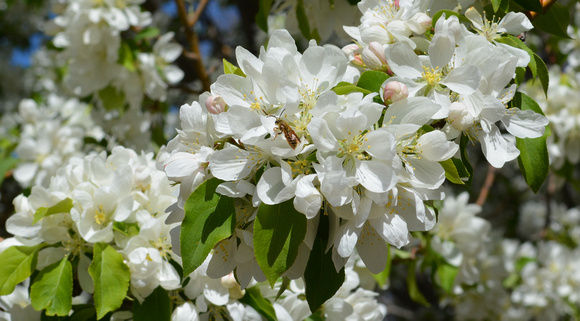 This apple tree has gnarled and peeled bark, with an envelope area where a limb had been cut at some point.  It made for a story-book composition. 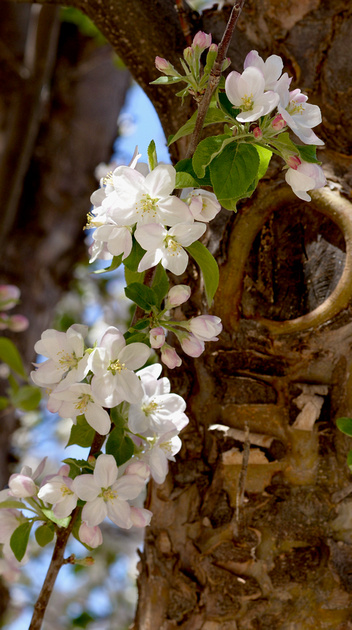 I can see using this very soft focus image as a backdrop or illustration for a future wedding book. 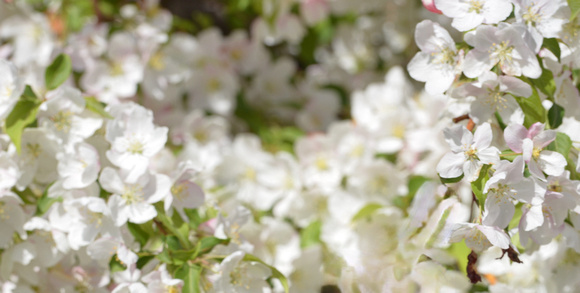 The blue sky filled the spaces between the flowers, branches, and leaves below, adding to the color palette. 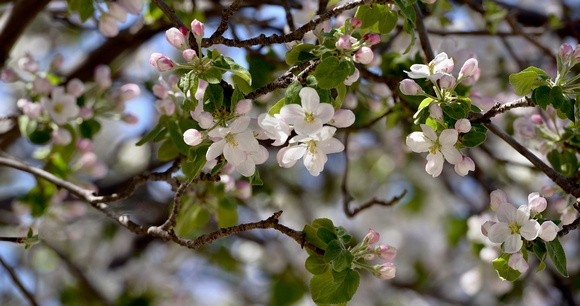 I am lucky enough to have a view of this tree from the office and it has offered a blast of fuchsia color for over a week.  It is always amazing that the blooms seem to stay attached, regardless of the 30-60 mile per hour winds that have been with us for what seems like the whole of April. 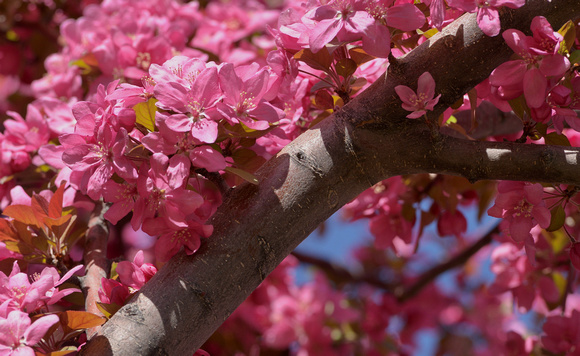 Finally, today's botany lesson.  The tree shown below is almost at the end of its bloom cycle, with the yellow anthers and white filaments, no longer surrounded by petals.  Anthers and filaments make up the stamen or male part of the flower.  To me, the design rendered by the stamens shows how much is involved in the natural world. 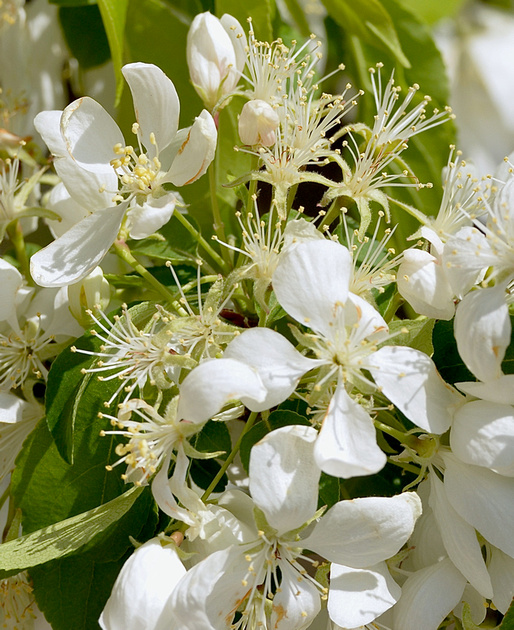 I hope that this final week of April 2022 is full of wonders and photographic adventures for all of you.  Thanks to Lisa, Barbara F. R., Lawrence, Victoria, Ingrid, Steve, Kay, Heather, TTT, Jean & Sam, Wayne, Catherine, and Earle for commenting on last week's blog.

TTT(non-registered)
More Gorgeous.
Wonder if you went back to those trees next week, would this hell-wind have blown all this beauty into the stratosphere?
Steve Immel(non-registered)
I like the subtlety of the image in your email. It's almost abstract. There's remarkable detail in all of these photographs, Daryl. The "stunning caramel colored bark" does make the weeping crabapple "flashy" and warm. And I like the pink buds amidst the white petals in image two. The glimpse of blue sky frames the blooms of the apple tree especially well and the gnarly bark contrasts nicely with the dainty flowers. The ultra-soft-focus treatment in image four is outstanding. The fuchsia is a handsome counterpoint to the white blooms in the other photographs. Nice view!
Sandra Bray(non-registered)
Your blossoms are much further along than here in Ontario; we barely have buds. Gorgeous pictures, Daryl. I love seeing that blue NM sky peeking through.
ANN ALEXANDER(non-registered)
Like you, I ADORE this season and these trees. Some of them are "blink and you miss it"--so intense, so brief. Thanks for pointing out the blue sky WITHIN the photo. I tend to see "trees for the forest" and miss the contrasting sky that is part of the "forest."
Every Monday throughout the year, I get to be reminded of crabapple beauty via your photo at the top of your weekly treat.
TP Lue(non-registered)
So pretty, I can almost smell them?
No comments posted.
Loading...