music to my ears

Shrouded by stories of the bizarre, supernatural, ghostly figures, rattling skeletons and gloom, cemeteries have been given a bad, or at the very least, a spooky rap.  But the ones that are lovingly cared for and beautifully landscaped are like parks of peace for the living, brimming with history.  Being in close proximity to one definitely has its advantages.  Like any airport or train terminal, there are a million stories found therein.  And frequently, music.  Whenever we hear music that is not coming from neighbors or any technology in our home, our eyes turn to the cemetery.  There have been mariachis playing nearly every kind of instrument (including bass guitar and even a tuba), rock music, and yesterday, as it happens, bagpipes and a snare drum being skillfully utilized by the New Mexico Fire and Police Pipes and Drums.  Music to my ears!

As anyone who falls into the category of spouses and other family members as well as friends of photographers, you learn fairly quickly that if you are with a photographer, especially one with a camera in hand, you are no longer safe from being dragged into a potential photo shoot.  You will be waiting.  And this is what happened yesterday.  Is that music?  Up to the office window, and what do I see but bagpipers in the cemetery parking lot - tuning up and preparing for what was a sizable event attended by many members of the Española Police Department.  I really wanted to photograph the pipers.  Really, REALLY needed to do it, so brunch guests or not, it was off to Rivera Memorial Gardens.  After watching the pipers and drummer a bit, with fascination and some hesitation, I finally made my move and asked if they would allow me to photograph them.  They were very kind and willing as they were tuning their instruments.  Trying to always be prepared, I had brought business cards with me and passed them out.  They walked away from the Kiva Chapel so they could tune without disturbing the service in progress.  I followed, and began to make images as they tuned. It was interesting to hear them talk about music in general, and proceed to tune the reeds.  Things had dried between the time the pipers arrived and the time they would be playing.  I did not know that Great Highland bagpipes have three drones within which wooden reeds are housed - one bass and two tenors.  The chanter, which also contains a reed, is used to play the melody.  The piece into which the piper blows is comprised of a mouthpiece, blowpipe, and blowpipe stock.

It shouldn't have surprised me, but it did, to hear them working on the scales as part of their preparation, as other concert musicians do.  Here is Greg Cheyne and his pipes, and another member of the group tuning one of the pipes in the lower right hand corner of the image.  James Lamb, Pipe Major, is also shown with his pipes in the second photograph.  The chanter has holes in it, like a penny whistle, that are covered or uncovered with the fingers to play the melody. 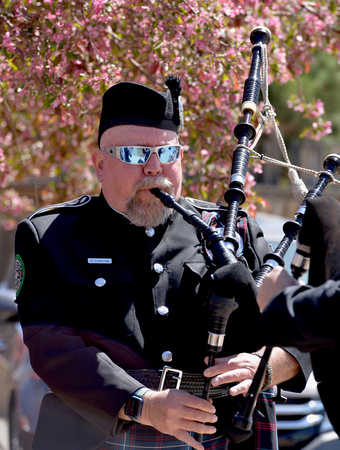 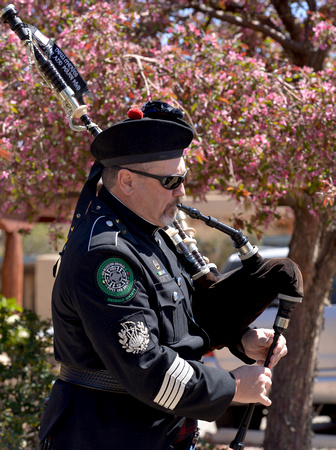 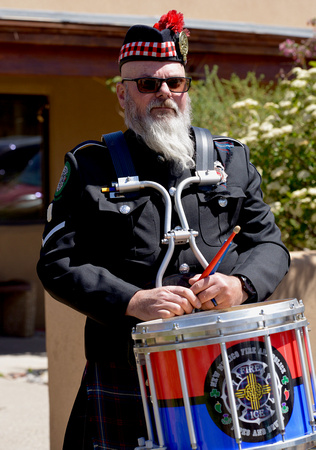 In this environmental portrait, both the pipes and Cheyne share the spotlight. 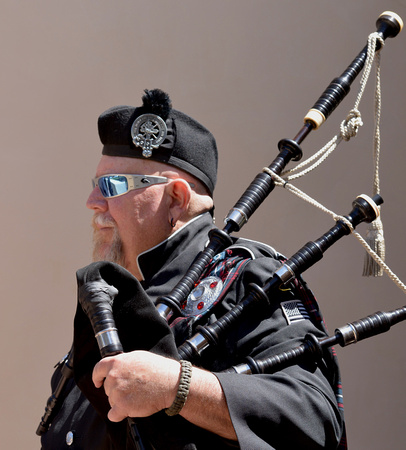 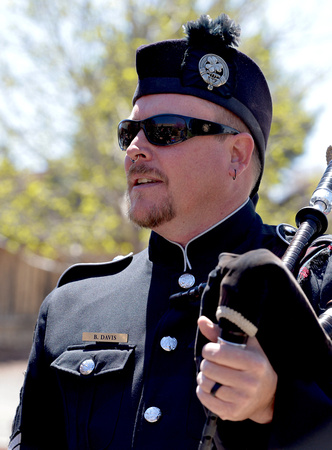 A sporan which serves as a pocket, pouch, or purse, is worn with a kilt.  The kilt plaid is called "American Heritage". 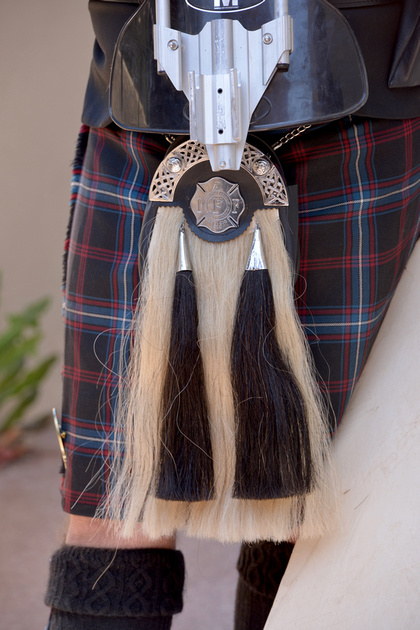 No pipers outfit would be complete without a sgian dubh (roughly pronounced skeen doo) or dirk, which is a Highland dress knife, worn in the sock.  It must have come in handy walking the moors and highlands of Scotland. 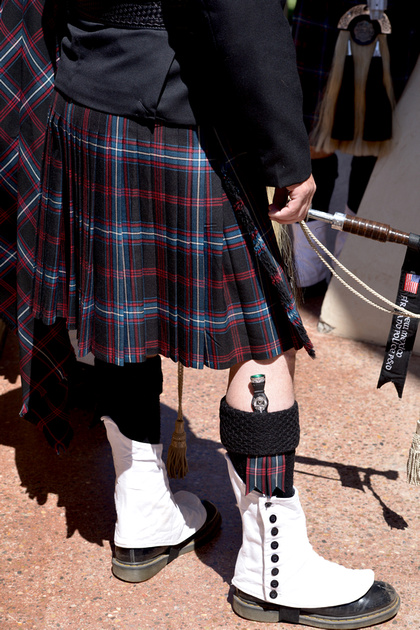 In perfect order, walking back to the Kiva Chapel. 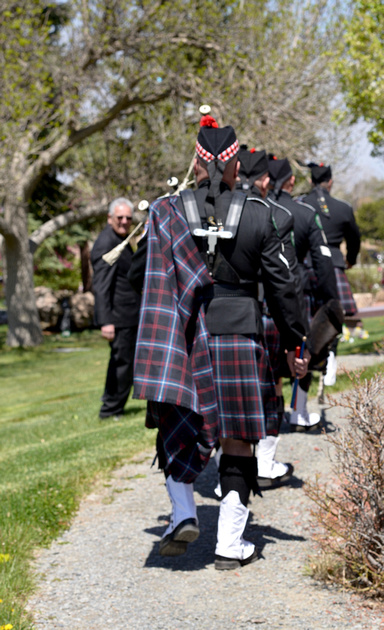 Thanks to the New Mexico Fire and Police Pipes and Drums members Fred Hawkins, Brandon Davis, Greg Cheyne, and James Lamb for their willingness to be interrupted by a photographer.  They play music for events statewide and beyond.  Since the organization conducts services for fire, police, and military members around the state at no cost, donations help with travel and equipment costs.  To donate or for more information, check out their website.

My thanks as well to Barbara F. R., Jean & Same, TP Lue, Steve, Ingrid, Ann A., Sandra B., TTT for commenting on this week's blog, and to And to Ingrid, Robert, and Fred for having part of their day occupied by photography.

Lawrence Jones(non-registered)
Daryl, love your photographs of the pipers. Nothing quite like the beautiful sound of bagpipes. Your photographs brought back a memory of seeing pipers in NYC during the annual St. Patrick's Day parade.
Ingrid(non-registered)
It was wonderful to be able to watch you at work, Daryl. You were very respectful and careful when asking for the permission to take photos and I think the lads actually enjoyed the session. I sure did. The kilts and instruments were a thing of beauty. Thanks so much for letting us be part of it
Greg Cheyne MA, LPCC, BSC(non-registered)
Thank you for the blog posting and your beautiful photographs. I think you captured the essence of our mission to honor the fallen.
Steve Immel(non-registered)
Isn't it thrilling to ask someone to take their photograph and the casual encounter leads you into a learning experience and a story? Seems like that happened here. There are, indeed, "a million stories to be found" and it's our job to find them. I can relate to hearing the music, seeing the pipers congregate and having to capture what's about to happen. To ignore the impulse, as I sometimes do, is sinful. You did the right thing and it led you to this marvelous and educational tale. I didn't know about the three drones housing two bass and one tenor reed either. It's always a good day when you learn something new.

Thanks for this excellent piece of writing and photographer. One of your best!
Suz(non-registered)
Very cool, I’m pleased to know that we Scots of American Heritage have our own tartan! Great pictures and story.
No comments posted.
Loading...