A short drive this week to Pecos National Historical Park was in the "we have not been there in some time" category.  In point of fact, we had not visited this wonderful part of the National Park Service system since the mid-90s.  Which is ridiculous because it is only 30 miles away from our house.  In addition to the site, I was curious if we could see the fire area from the park, since smoke from the west side of the Hermit's Peak/Calf Canyon Fire is visible from many places in Santa Fe.  It was a little like a disconcerting photo bomb as I looked through the camera lens.

After walking the short trail up to the mesa where the remains of the Pecos Church stand, it is easy to see why people have lived here and why humans from the Paleoindians and Puebloans to the Spanish conquistadors to Mexican and Anglo armies chose this place.  It is on a mesa with nearly 360 degree views of surrounding mountains above and streams below.  Considering it is adobe on rock wall foundations, the church is a massive edifice on the grassy knoll. 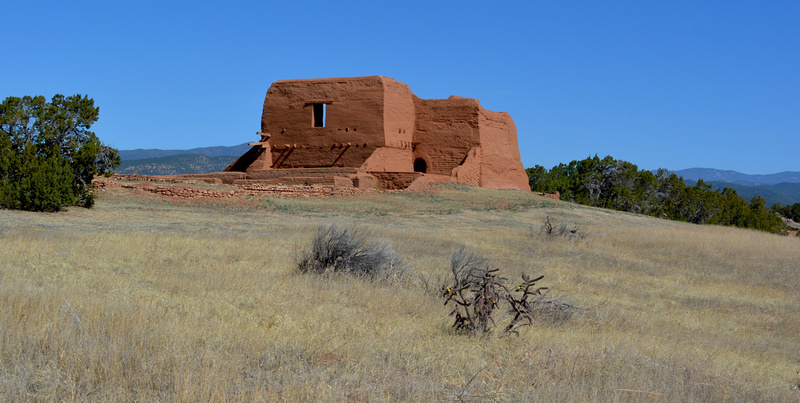 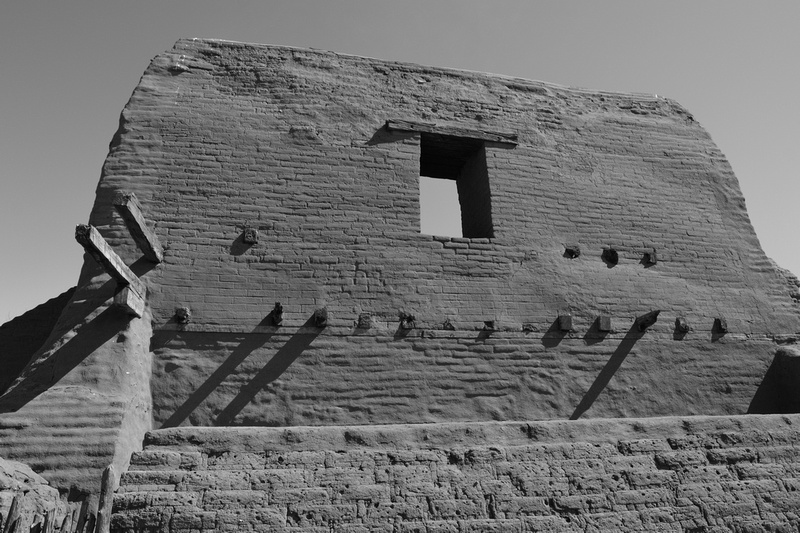 Smoke from the fire can be seen in the right hand third of the photograph, if you look left from the kiva ladder.

There is something about kivas.  More than simply a hole in the ground with a ladder, the smell and coolness of the earth and the latillas in kivas, in addition to centuries of ceremonial activities, give them a curious and comforting feel. 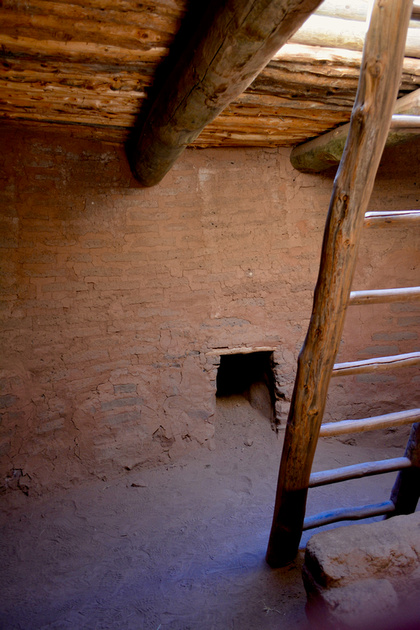 The ladder reaches to the sky. 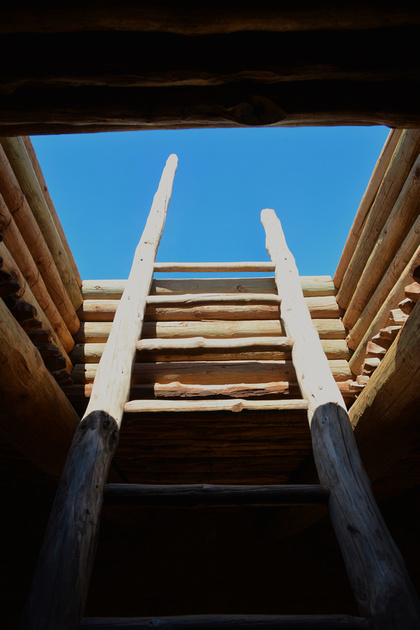 One of the most fascinating elements of the church itself is the archways.  It is unusual to see an arch in early Southwestern architecture.  Moorish influence may be at play here.  Arches provide openings from one room to another.  The second archway reveals a buttress with adobes stacked at an angle to support the wall. 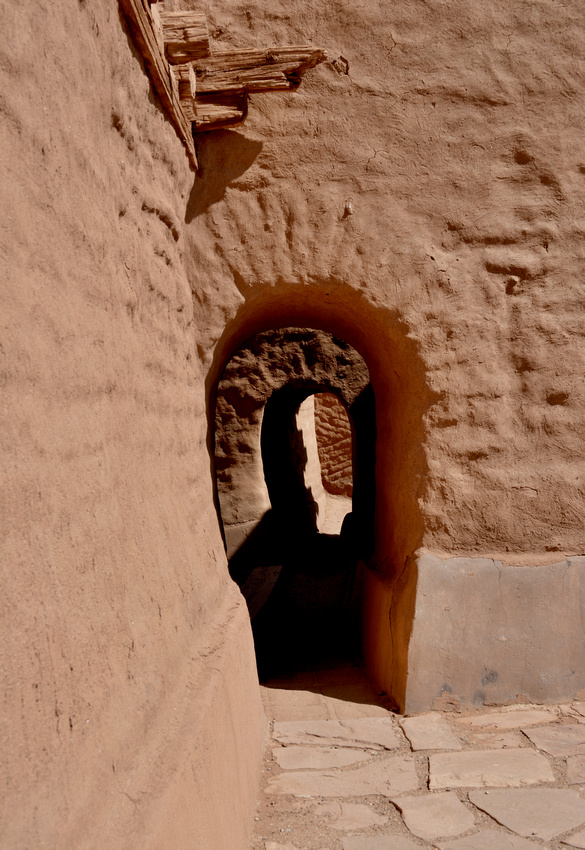 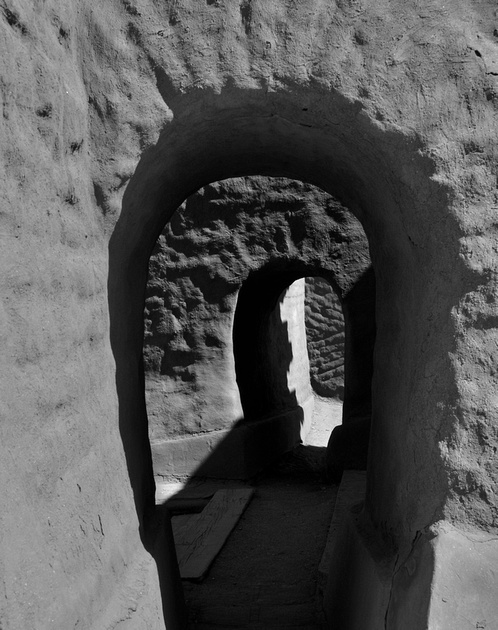 The shadows of different elements in the Pecos Church are fascinating.  Below, structural timbers frame the archway. 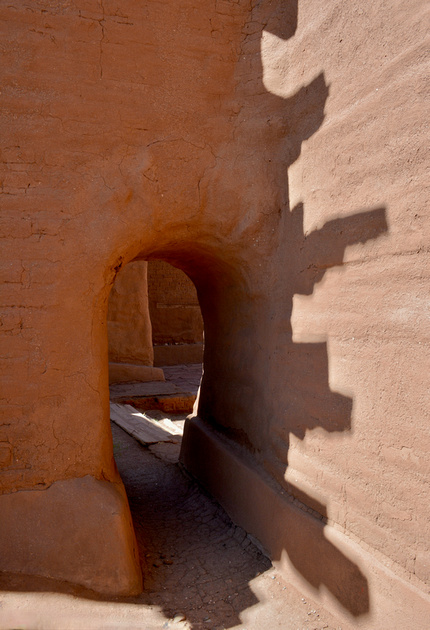 Shot from almost any angle, the mass of the church is undeniable.

I would recommend a visit to Pecos National Historical Park to anyone, but particularly to those who live in New Mexico or are visiting Santa Fe.  It is a very short drive and worth the time.  You may also be able to see employees and interns mixing adobe bricks and plaster for continued stabilization.  However, while searching the Park Service site this morning, I was surprised to learn that two days after this photo shoot, the Park had been closed due to the Hermit's Peak/Calf Canyon Fire.  As always in photography, timing is everything, along with luck.

Dianne James(non-registered)
I'm just blown away by your beautiful photos of this special place. Wow!
Ingrid(non-registered)
This is our favorite Park. All our visiting relatives are introduced to it and love it. The photos really do the feeling you get there justice.
Victoria(non-registered)
Lovely photos! We need to make the jaunt to Pecos, just a stone throws away!
Claudia(non-registered)
Lovely pictures, Daryl! I love the Pecos National Park. I hate that y’all are having fires this early and wish all of you safety during these times.
TP Lue(non-registered)
Between your incredible photographs and the story, I feel like I am there.
No comments posted.
Loading...