mysteries of the forest

A thick overcast blanketed the mountains, opened only by the aspen.  Near 10,000 feet, fog, mist, and then rain enveloped us as we walked up the Aspen Vista Trail near the Santa Fe Ski Basin.  It was a day to breathe in the rarified air, and enter a dream-like state, surrounded by moisture and growing things.  The "fix" is as important to us as walking on the beach is to many.  Because of the soggy surroundings, the trail was blissfully uncrowded.  Raucous stellar's jays and chipmunks' admonishments for disturbing their day echoed through the trees. And the rain fell.  It was a magnificent morning.  I had brought my camera, knowing there would be some late summer flowers.  The purple asters were in full bloom.  A gentleman passed us and we shared greetings.  He then said "Have you seen any mushrooms the color of your shirt?  They were everywhere when I was here last week." I was wearing a coral-colored fleece.  I said "Not a one."  As we made our way back down, looking like drowned rats, there was a side trail and curiosity made me take it.  In the back of my mind were thoughts of those mushrooms, so my head and eyes went down, searching. Oh, there is one.  And another and another as I made my way down a slight incline.  Everywhere I turned, there were mushrooms.  And me with just enough knowledge to put in a thimble and no guidebook.  But I had my camera.  Fred was pointing them out.  Life was definitely good.

Upon our return and after downloading the day's work into the computer, my mission was then to take a stab at identifying the beauties.  Working my way through hundreds of online images, complete with identifying information, it was apparent there was everything from bracket or shelf fungus to Russulas and wax caps, to a whole slew of things I have yet been able to identify.  But it has been one heck of a fun ride.  Haven't had that many giggles doing a nature shoot in some time, and I am ready to go back for more.

Given the darkness of the forest and the grey skies, I used my in-camera flash about half the time.  First, I'll start with what I know - shelf fungus. The particular variety shown here is called turkey tail shelf or bracket fungus (Trametes versicolor).  The turkey tail is a Polypore and a wood decomposer, found on downed logs or trees. 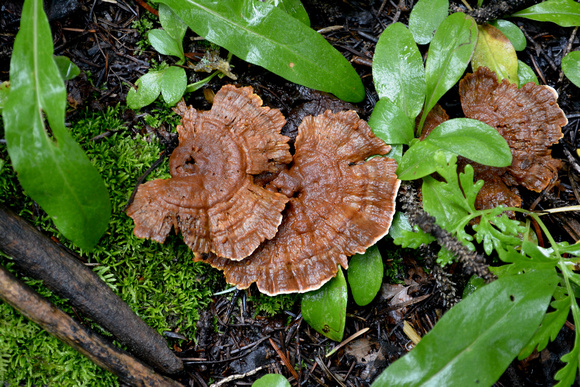 As the hiker had mentioned, there were indeed hundreds of coral or rosy colored mushrooms in the mix.  Some are in the genus Russula, including the one below, shot from above. This Russula rosea or Rosy Brittlegill (my best guess) had been broken off at the base by a forest creature, showing the gills beneath the cap.  There was a lot of fine dining happening in the forest litter. One of the other things I know about mushrooms or fungi is that some have gills.  But when pouring through online material, I found they also can have pores, or teeth.  Mind you, I have no clue what this particular mushroom is, but the teeth are clearly visible.  Looking at many of the mushrooms and fungi, I thought I had landed on another planet.  Definitely other worldly. 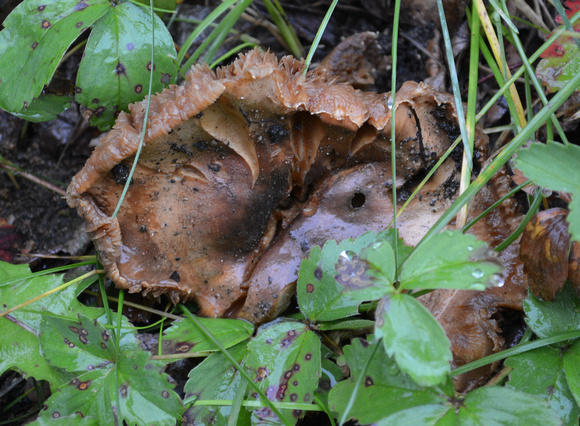 There are also wax cap mushrooms.  The one below could be of that variety. 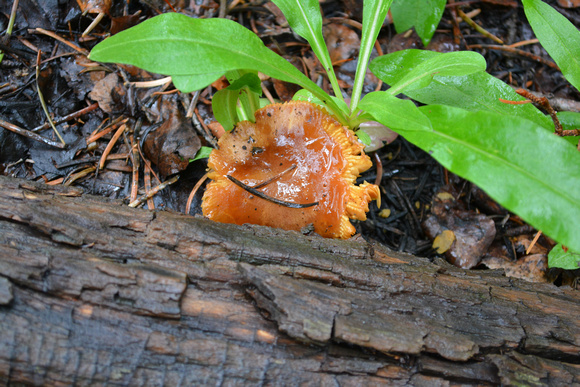 This particular one reminds me of what a neighbor said about one of her paving bricks being pushed up.  She thought it was a tree root until it was flipped over and a mushroom lay beneath it. The mushroom below was on its side with gills in plain view.  They are part of the reproductive process. 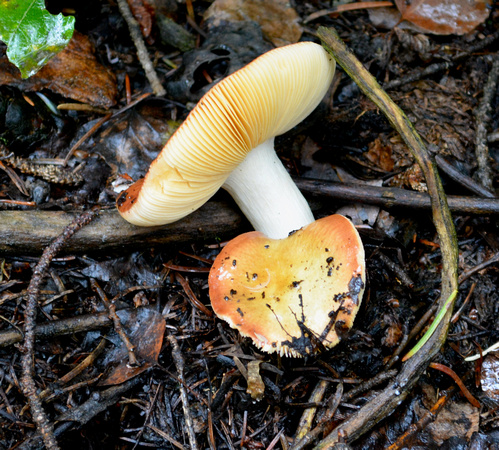 I was having entirely too much fun, but here are a few more beauties. I particularly love the design in the stem of the tiny variety below. 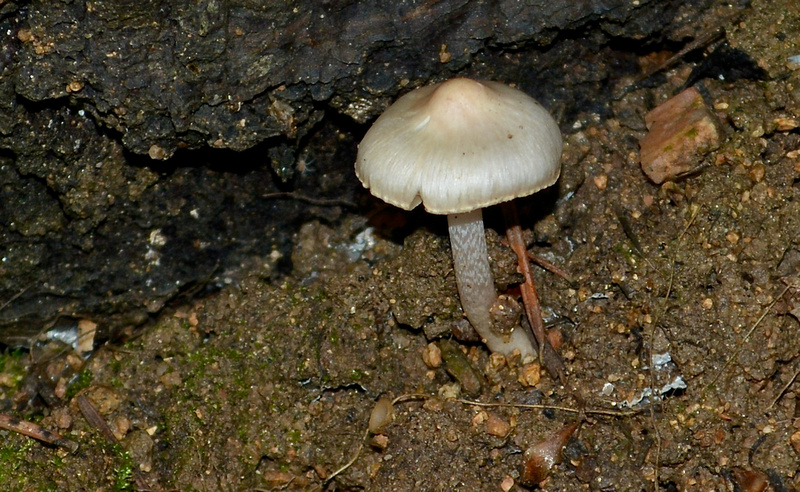 It was abundantly clear to me that more research and intensive course work would be needed before I would ever think about harvesting and eating any mushrooms or fungi from the wild.  But my bet is that there was a combination of edible, poisonous, and hallucinogenic species in the forest primeval that day.

I hope the final days of August are filled with photographic possibilities and exploration.  Thanks to Loretta, Jean & Sam, Suz, Christina, TTT, Steve, and Catherine for writing this week.

Charlie Kalogeros-Chattan(non-registered)
Neither plant nor animal, they are indeed their own kingdom. When I see them, I feel like the underground is singing to me. You and Fred will be interested to know that this year we have mushrooms up here on the desert floor of Carson Mesa. Also moss in the shadow of the sage. One white mushroom is the size of my fist. Such a strange year, eh?
TTT(non-registered)
Gorgeous. Delectable!
Steve Immel(non-registered)
What a wonderful ride you gave us today. You were at your poetic best and were obviously giddy with your soggy experience and all that you learned. One thing I learned from a mushroom expert friend in New Hampshire is that just because you don't see them doesn't mean they're not there. To her eye they were everywhere, and I didn't have a clue. The varieties you uncovered were a marvel. I wasn't expecting the range of colors, some quite brilliant. "It was a day to breathe in the rarified air and enter a dream-like state...." Indeed. We're talking mushrooms after all.

This was a super post, Daryl. Did your research tell you which one of those beauties is edible?
Lawrence Jones(non-registered)
About 15 years ago on a solo hike up the Fresno Trail (off the road going up to the Taos Ski Vallery), I hiked and hiked upward until I finally came to a flat meadow. In that meadow were a lot of mushrooms. They were big and solid red on top with white spots decorating the top. I didn't pick any because I didn't know the first thing about wild mushrooms. But, they were beautiful and different from all of those you photographed and published in this blog. By the time I was halfway back down the climb, it had become very dark and that little journey was a tad nerve-wracking for me. Slipped and fell many times because I was trying to move too fast. I still remember those big red mushrooms though.
elida hanson-finelli(non-registered)
I’m still following your weekly events and they thrill me with both your artistry and articulation!
Particularly interested myself in learning more about fungi since our yard is filled with them after these Blessed Rains this year.
Thank you for being You.
No comments posted.
Loading...