During the past week, there were hints of change in the air.  A low temperature of 49° one morning sealed the deal.  There is nothing like the coolness to remind me, again, that the autumnal equinox is on its way, this year on Thursday,  22 September.  It is time to explore farmers' markets, fields, and vineyards, and document the goodness and beauty that lies therein.  During the mid-1990s, I visited, wrote articles about, and photographed a number of New Mexico wineries for Rocky Mountain Gardener, Rocky Mountain Living, Adventure West, the State of New Mexico Office of Cultural Affairs "Moments of Enchantment" radio segment, as well as other publications.  Quite frankly, until this week, I had forgotten how much I enjoyed researching the state's wine industry, and the feeling of being among the vines, growing and developing at their own pace.  Having grown veggies in our own raised beds at 7,800 feet elevation for nearly twenty years, I have great admiration and appreciation for people who grow and process food for a living.  The feeling took me to Vivac Winery near Dixon last week, on what turned out to be another spectacular day in the American West. 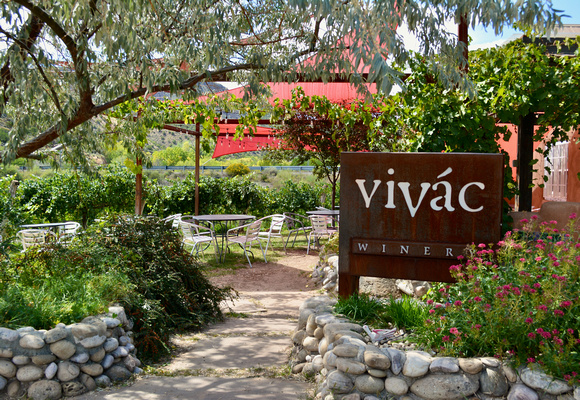 Liliana Padberg, Co-Owner and Certified Sommelier at the winery, was kind enough to allow me to roam the vineyards and make photographs.  I had not visited the winery since the tasting room opened in 2004.  My writing had been done too early for Vivac to be included.  It was high time for a visit.

As humans, we are always discovering and altering the the food we eat.  Even if most of us have some expectations about wine, we don't necessarily think about the experimentation that goes into making it.  This is long-range planning in the strictest sense of the word.  Vintners, especially those in New Mexico who are trying to work with our notorious late frosts in the spring and early frosts in the fall, are constantly trying to discover the best grapes for the climates and soils in which they plant their grapes.  While interviewing the late Henry Street of Ponderosa Valley Vineyards and Winery in 1998, I discovered he had a test plot of 420 new plants, 10 red and 8 white of 25 cultivars from the former Soviet Union to follow their vigor and hardiness at 5,800 elevation.  At Vivac, the elevation is similar - roughly 6,000 feet.  Among the rows of vines here are Pinot Meunier, planted in 2021.  A red grape, it is part of the grape trio used in champagne to add body and richness.  The gnarly juniper post adds to the character of the rows. 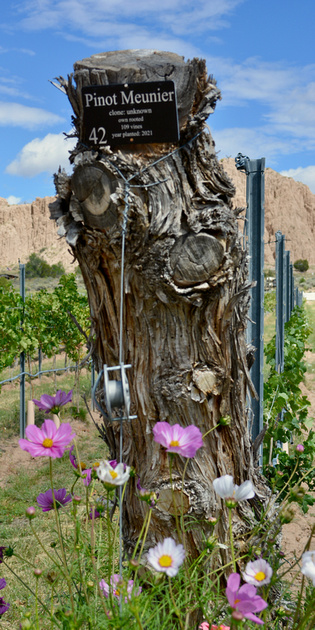 The oldest vines I found were the Riesling, planted in 2011. 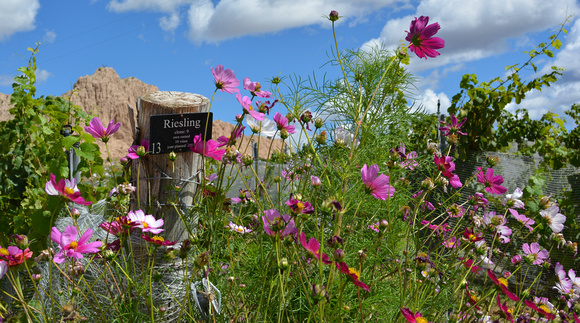 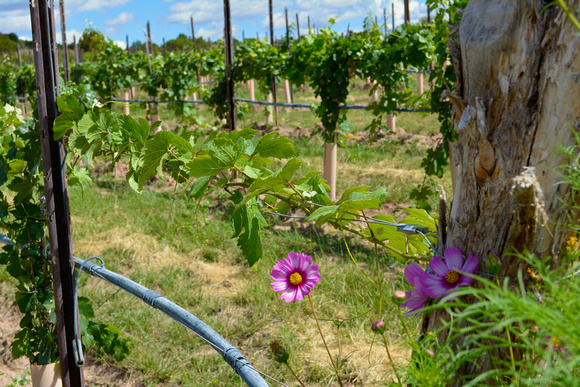 Petit Verdot vines, a red wine grape, were also planted in 2011.  Netting protects the grapes that have not yet been harvested.  Barrancos Blancos, the sandstone mountain in the background, appears on the Vivác label. 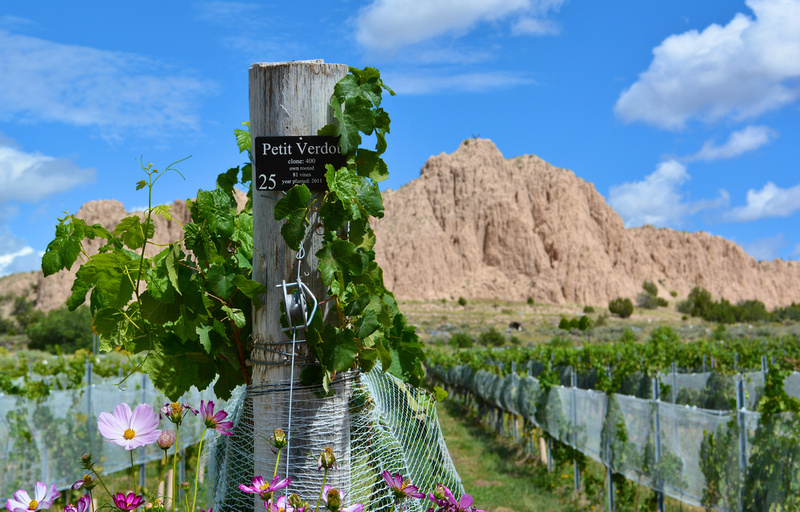 Vines for Grüner Veltliner, an Austrian white grape, were planted in 2013, followed by Arandell vines, planted in 2015.  Arandell is a red grape that is disease resistant and winter hardy in the Finger Lakes region of New York State. 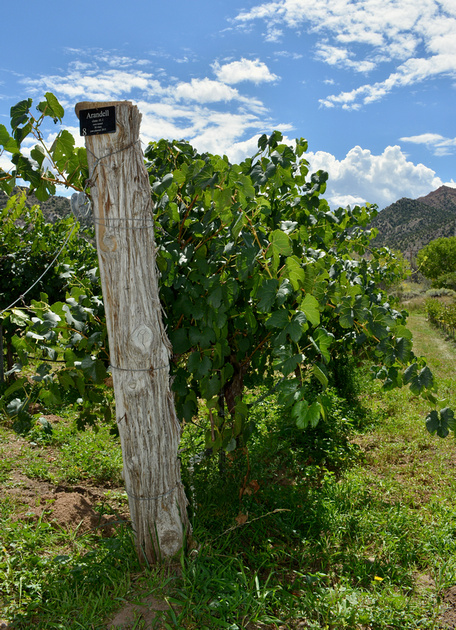 What a lovely setting in which to taste wine!

Because I favor reds, I chose Montepulciano, Sangiovese, Syrah, and Cabernet Sauvignon for the flight. 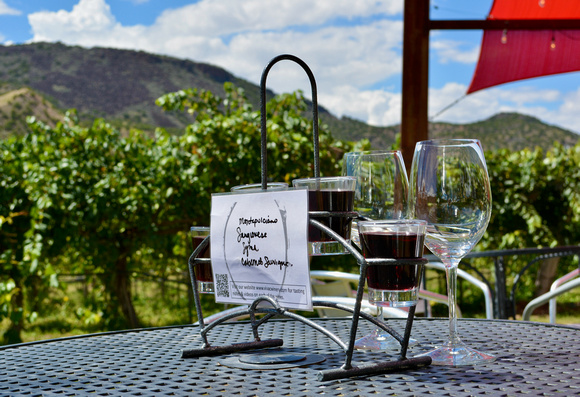 The Syrah and Cabinet definitely had legs! 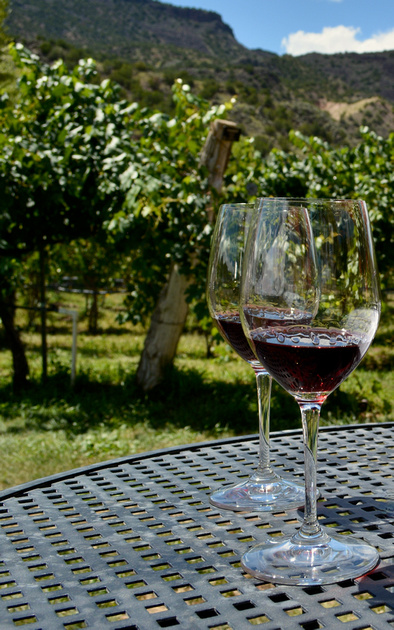 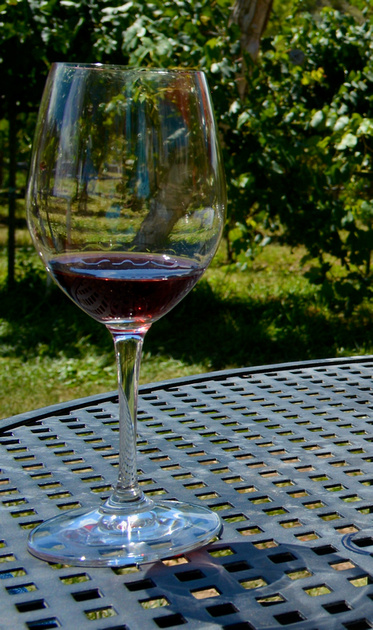 Although a major portion of the grapes used in Vivac wines are grown in the Deming, New Mexico area, all the winemaking happens at Vivac.  And grapes in three estate vineyards, "Fire Vineyard", planted in 1999, "1725" (2008 and 2010), and Abbott Vineyard, are organically farmed in the Dixon area.

"Vivác Winery, along with other growers in the area, are currently working to have the Northern Rio Grande Valley named as its own AVA (American Viticulture Area)."  Long term planning indeed.

There is such an abundance of information and history about grapes, and wine growing and making in New Mexico, and on the history of the Padbergs and Vivác Winery that it cannot be covered in this blog.  I highly recommend an in-person or website visit to learn more.

Claudia(non-registered)
Great pictures and write-up, Daryl. I do miss the wineries in New Mexico!
Steve Immel(non-registered)
I'm envious of your visit to Vivac. Some of my favorite memories are of visits and tastings at wineries in California and France. The essence of wine culture speaks to me. And where there is wine made, farming, cheese making, great bread and farm to table cuisine usually follow. It's a lifestyle I revere and, as we've shared more than once, California wine country would be my perfect place if we could afford it.

Trying cold weather grapes makes good sense so grapes from New York's Finger Lakes or those from Austria and Germany are obvious choices. Torrontes is cultivated as high as 10,000 feet in Argentina. That crisp white might work here, as well.

Good legs on those reds and the glass on your cover email. Viscosity is a wonderful thing.

Next time you're winery hopping please let us know.
No comments posted.
Loading...