For some odd reason, possibly a gift from our respective families, Fred and I are conservatives in the purist sense of the word.  Not in the twisted and tortured way that some on the outer edges of the political and religious spectrum use it, but as in "conserving" - money, energy, and material goods - most of our married lives.  All four of our parents were babies of the Great Depression, and all but one were big savers.  You could almost say conservation is in our DNA.  Thus, a year ago, when we moved from our off-grid home in Taos County to our city abode, one of the goals was to save as much energy as we could, and generate excess energy to return to the grid.  Our goal was to become "carbon neutral".

On 4 November of last year, our solar system installed by Positive Energy Solar came online.  There has been nearly a year of electrical production and collection by the system, and I wanted to present an update.  Sixteen solar or photovoltaic panels are on the roof, absorbing the sun's rays and turning it into energy, with their accompanying wires and mini-inverters on each panel.  It was quite the production, worthy of Broadway, when the panels and electrical boxes were mounted all during one August day, and three months later when the switch was literally flipped, the electrical meter began its journey backward.  The system generated 22 kilowatt hours (kWh), that first day.  Throughout the year, we discovered it varied day to day, depending on the outside temperature and sunshine, from a low of 6 kWh on a totally cloudy day to a high of 42 on a bright high summer day.  Here is a shot of one of the technicians holding a panel on its way to its place on the roof. 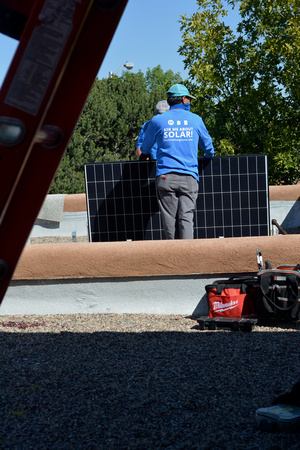 A bit of geek stats here.  29% of electricity produced by the system runs the house and charges the electric car.  59% goes to offset the natural gas we use for heating, hot water heat, and cooking.  The last 12% offsets the carbon footprint of the food we eat and other miscellany.  Determining carbon footprint is a little tricky, as everything humans do and use is considered part of the total footprint - food production, clothing, internet usage, banking, etc. Even a person's diet - vegetarian, paleo, or omnivore - is part of his or her footprint.  It is complicated!  But given that the COP26 (Conference of the Parties) in Glasgow began this year on 31 October and runs through the 12 of November, it seems appropriate to feature alternative energy here.

One of the engineers at Positive Energy Solar created the layout and design of the panels to maximize energy production, keeping them out of the shadow of pipes and mechanical systems, as well as chimneys.  They originally indicated the system would probably produce about 9,600 kilowatt hours over the year and they were pretty darned close.  We figure that by the 4th, the system will have produced about 9,550 kilowatt hours. Literally, they have this down to a fine science.

A shot of the nearly completed set of six panels on the garage roof.  The other ten panels are on the second story roof. 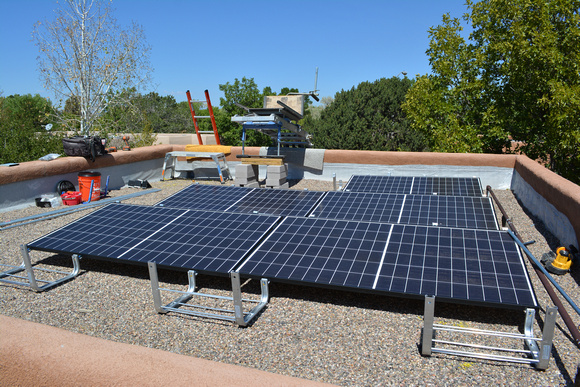 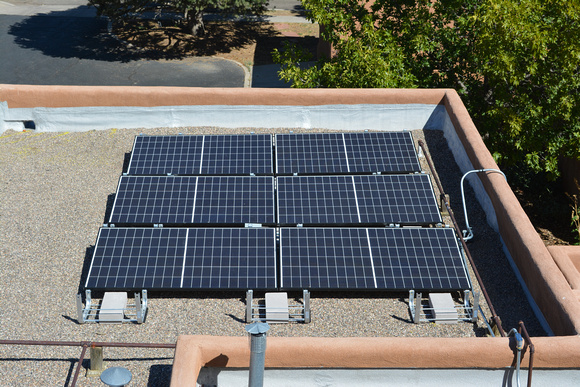 I loved this guy.  A real professional wire and conduit wrangler. 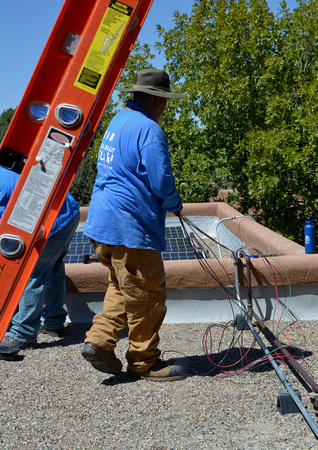 The electrician put on the final touches, linking the system to the old electrical meter on the house and installing new ones to accommodate the additional energy. 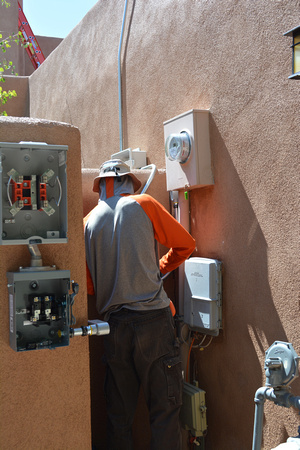 I am hoping that the infrastructure package being debated in Congress now will provide the basis for more home, government, and commercial systems, featuring solar and wind energy.

Steve Immel(non-registered)
This a fabulous lesson in the intricacies of your impressive solar system. It appears to be meticulously planned and and installed by the folks at Positive Energy Solar. Really masterful. I was amazed to read that the engineer had the panels installed to that they were not in the shadows of the pipes and other mechanicals. That level of detail wouldn't have occurred to me. Bravo to you and Fred for the extraordinary project and for making your home carbon neutral.

You two are champs.
TTT(non-registered)
First, goddess of documentation, kudos for a climate-conference-timely blog. Definitely thought provoking !!
Second, you are saying that you use 29% of the electricity you generate, so the 71% extra electricity flows back? to the system and that means your house really generates enough power for your house and 2+ other houses. That means that PNM doesn’t have to generate or buy that power from fossil-fueled power plants. Please write a letter to the editor of the local papers and give them your stats - and run the numbers out to say that if every third house in Santa Fe had a solar system like yours, Santa Fe might not need PNMs power - Probably the same math for commercial buildings. Gosh, when talking about infrastructure investment, solar power is a significant part of the solution here in the southwest as well as in other sunny climes.
Dianne James(non-registered)
That's an awesome system, you guys! So, no lithium batteries, I'm guessing. There's a family that had a channel on YouTube called The Swedish Homestead, (now it's Simeon and Alex) when the Swedish government, which owns the first foot or few feet deep of all the land there, decided to dig up their organic pastures for lithium mining exploration. Simeon and Alex called it quits on the his family's homestead, and left for Austria. Had to sell all their Highland cattle, their chickens and hatchery. So sad to see that. It was really an eye opener. I do have a question, since your system is connected to the grid, what happens if there is ever a main grid-down situation? Does it provide your household all you need first, or store it? I realize that having lithium batteries are important for storage in a dire situation such as that, but the task of mining and disposal of it is a quandry, at least to me. I'm in no way judging anyone for wanting to store electricity for emergencies, btw. I would like to have a solar system, rocket mass heater/water heater, etc. myself, someday, to use less resources on our planet. I'm already pretty miserly with the electricity and gas, lol. Thank you for sharing your solar system information- it's wonderful that you care and can do that! Awesomeness (is that a word?)!! Love you guys.
No comments posted.
Loading...