it takes a village

One of the more noticeable side effects of the pandemic closures, at least in our city, is home improvement.  Since people weren't traveling, energy was and is being spent on those home improvement projects everyone was putting off for years.  Not a single day passes during which some sort of construction - interior, exterior, and landscaping - occurs in the neighborhood.  Stucco, walls, roofs, new cooling systems, and garden maintenance happens from dawn until dusk.  And, perhaps due to the fact that people are at home and/or working from home, added attention is also given to the very local environment.  They are noticing birds and animals like never before.  I can honestly say that we have never lived in a place where there was at least one dog per household, and where so much attention and care was given to those dogs and animals of all types.  It is a wonderful thing to see.

A simple (and some would think rather mundane) "event" happened mid-week.  A baby crow either fell out or was pushed from a nest.  It was on the ground in the shade of a big piñon tree.  Before half an hour went by, there was a small dish of water.  Then a bigger dish of water appeared.  Then bird seed. Then dog food.  All conveniently located close enough so that the baby could survive and build its strength.  Several kind neighbors felt we should call animal control or the wildlife center in Española.  To a person, they all knew that baby birds should not be touched.  Because we had watched ravens a lot at our home in Taos County, we felt the crow was quite well and fit, and was simply a baby and had not grown its tail feathers or learned how to fly.  It had just fallen from a nest.  What could we expect from that jolting experience?

By the end of the first day, it was hopping around, and ended up on top of a decorative ladder during the night.  But during the next several days, we saw a true and clear example of the African expression or proverb "It takes a village."  As the chick developed, no less than four adult crows and sometimes one magpie that hangs around with the crows, were looking after it, and feeding it.  One of the neighbors said "Oh, I hope it is alright.  I saw its little mouth and it looked like it was bleeding."  Aha!  Sure sign of a chick of any bird species.  The mouths are red so parents and caretakers know where to stuff the food. The photograph below is of a raven chick's food receptacle.  As with all healthy babies, it is almost constantly open and ready to receive the next snack. 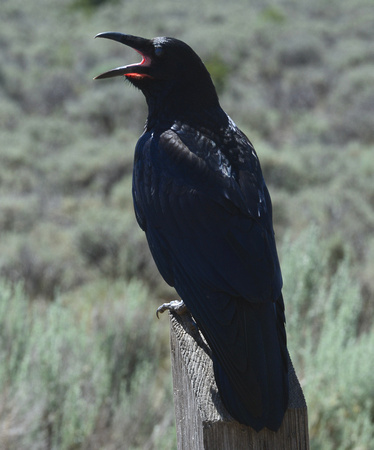 Another tell is the blue eyes members of the Corvid family have as youngsters. 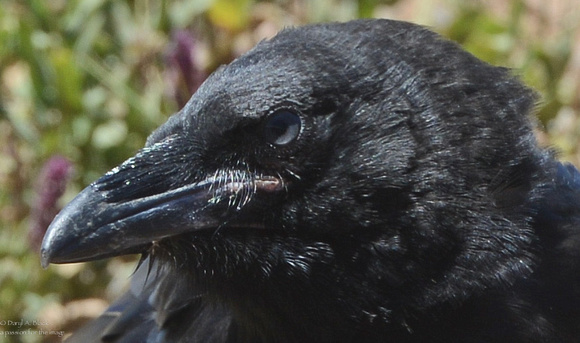 Ample downy feathers are also apparent on their heads and neck areas. 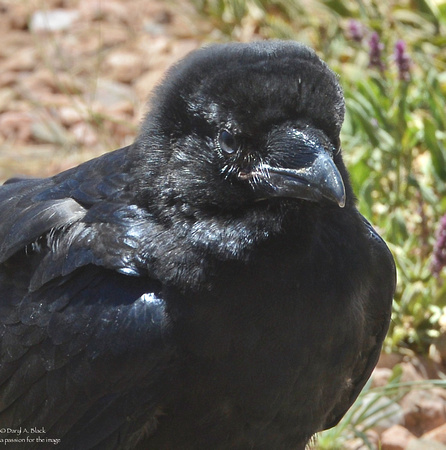 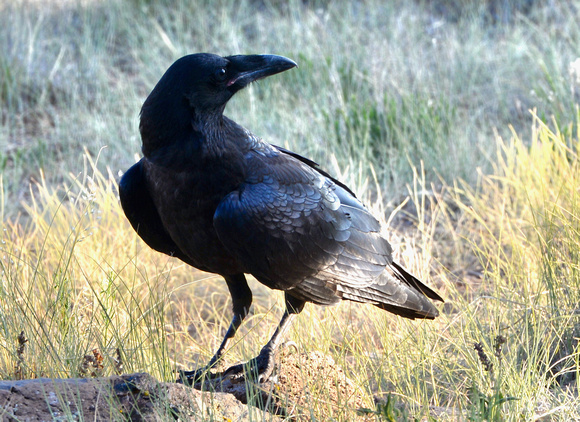 And just for fun and abstraction, bird and feathers on the move. 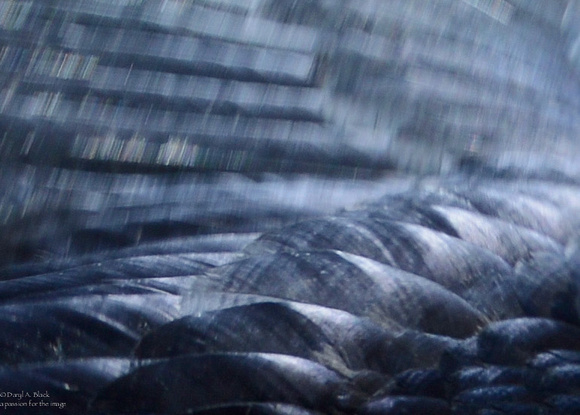 The above photographs are of raven chicks from our life on the mesa.  I use them here to explain the process of Corvid development.

It was humbling to hear from so many of you about last week's blog.  Many thanks to Barbara, Victoria, Christina W., Diane, TTT, M. Fred, Ann, Ronie, Anne OK, Jean and Sam, Wayne, Steve, Elida, Char, and Ingrid.

Wayne Gesterfield(non-registered)
Ah, yes, we sure love our birds.
My parents were big Audubon bird people.
And it rubbed off on me a bit.
I love the texture of the wings you captured.
Good looking bird.
Steve Immel(non-registered)
Thanks for thought provoking story, Daryl. I learned a lot about crows and and the community of humans and birds who cared so much about of the chick. I didn't know about the young crow's blue eyes or their red mouths. I was aware of the crow's patina but your fine photograph accentuates the luster. This is a post where your text really shines.
TTT(non-registered)
Gotta love that magpie who hangs with the crows! Wish you’d been here yesterday to take photogs when the local roadrunner hopped up on the birdbath like he was stepping up to the bar for a beer. we all are so lucky to live in the middle of this high desert nature preserve. idea for next bird blog - difference between ravens and crows.
Dave Okerberg(non-registered)
I am now so amazed with birds! I didn’t used to think of them much, other than it would be fun to fly like them. But now, I am fascinated and your blog today was Wonderful! I am headed outside now to go talk to some hummingbirds.
Barbara Dawson(non-registered)
This is a wonderful and touching story. Thanks for sharing!
No comments posted.
Loading...