Now that most countries around the globe have at least partially opened following what hopefully was the worst of the pandemic, celebrations are in abundance.  Every day is something to cheer, which is the way it always should be, but with the busy-ness of life, that doesn't always happen.   It is apparent that people are embracing being together and doing things we used to take for granted.  But there was an extraordinary event yesterday that made this New Mexico girl swell with pride.

Virgin Galactic's SpaceShipTwo Unity 22 made a successful suborbital trip to the edge of outer space, taking off into the morning air from, and landing at SpaceSport America between Truth or Consequences and Alamogordo, New Mexico.  When then Governor Bill Richardson and Richard Branson originally conferred on the idea 17 years ago, I (along with many in the state, no doubt) were unable to envision such a thing and the money it would cost to build.  But regardless of whether one feels this was a huge infomercial for Virgin, or views it as another "what's the point?" venture, seeing the Unity take off above the New Mexico landscape was viscerally exciting.  Top that with the praise heaped on the state for taking the plunge into the future of commercial space flight must have produced a true sense of accomplishment for all involved.  This, of course, has absolutely nothing to do with today's blog, except for the fact that I am firmly planted here on earth, grateful for every day.

Chrysanthemums are the stars today.  Using the geography of sandstone and a black crackled pottery plate, I experimented with emphasizing both backdrops.  Looking down from space? 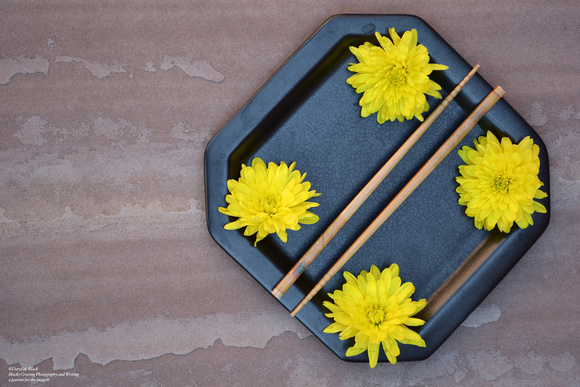 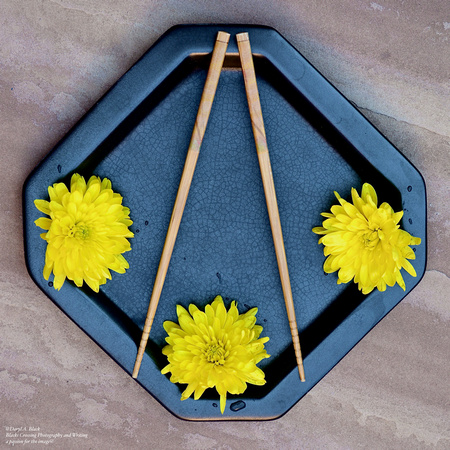 Anything floating on water has always been fascinating to me.  These two shots were made half an hour apart.  The first was in deeper shade. 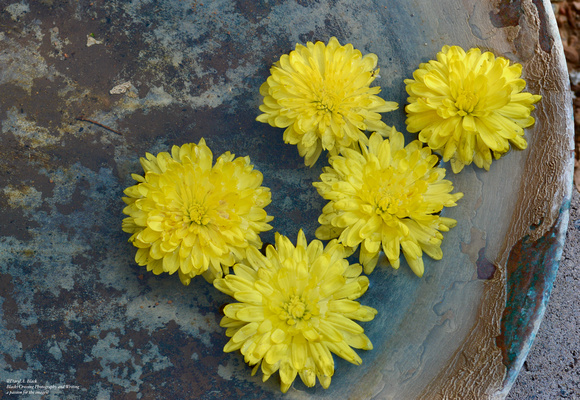 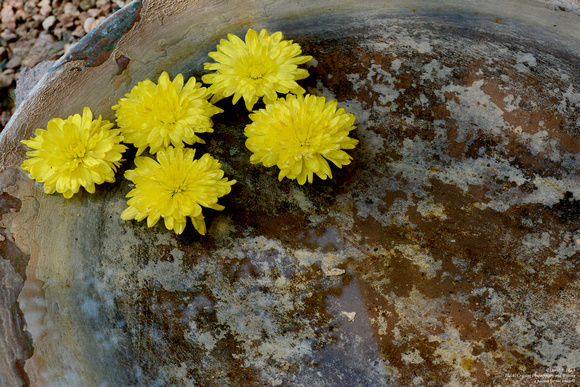 Thanks to Connie, Dianne, Steve, Jim & Louise, Ingrid, Barbara, Ronnie, Wayne, Char, Jean and Sam, and Steve for writing this week, and to TTT & Ben for providing the inspiration.

Charlie Kalogeros-Chattan(non-registered)
Like many I am holding two truths regarding the space flight: self-promotion and squandering of resources that could be used to feed the hungry of the world on the one hand, coupled with pride in New Mexico's vision and excitement about regular civilians (albeit of the millionaire persuasion) getting to view the earth from the broad perspective of seeing our home from above. And your chrysanthemum reminder that I don't have to leave home to change my perspective. Lovely photos--fun to imagine the blooms as worlds floating in space.
Steve Immel(non-registered)
The launch was pure self-promotion but it was still entrancing to see the craft separate from the mother ship. Kudos to Bill Richardson to have seen a future for space flight in New Mexico.

The sandstone and cracked pottery are ideal vessels the chrysanthemums. This series has an Asian tone to it and not just because of the chopsticks.. Each shot is elegant in a Japanese sense. The flowers floating in water are very effective and is most evident in the second of those. Your still lifes are beautifully designed and lit, Daryl.
No comments posted.
Loading...