Hardly a day goes by when I don't see a mention online or in print about pickleball.  The game has been around since its "invention" in 1965 on Bainbridge Island, Washington.  Joel Pritchard, Barney McCallum, and Bill Bell are credited with devising the game (ostensibly after not being able to locate a badminton shuttlecock), challenging their children to use different types of balls and rackets.  The rest is history.  I became aware of the game because of a friend, Gigi LeMaster, who began play in 2011, and eventually became a world-wide champion.  She is a member of the pickleball Hall of Fame and competes and teaches internationally.  After originally using a whiffle ball, a ball unique to the game was developed. The polymer ball should measure between 2.87 and 2.97 (73-75 mm) in diameter, weigh between .78 and .935 ounces (22.1 and 26.5 grams) with 26 to 40 evenly-spaced holes.  The paddle is hard-faced and should not exceed 24 inches wide (0.61m) and 17 inches long.  The image below gives you a visual of both items. 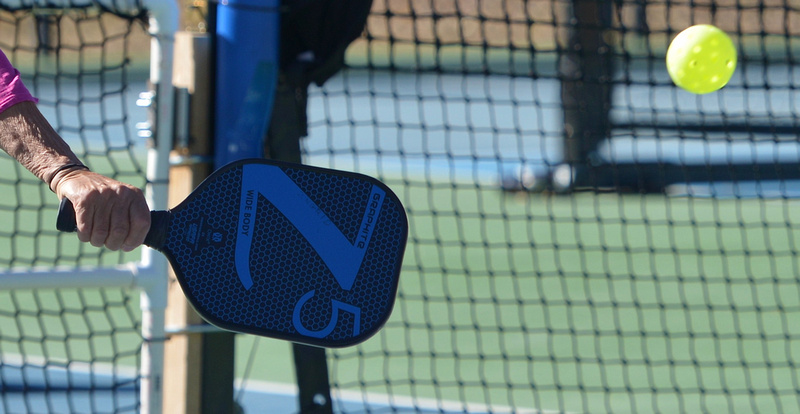 Not knowing much about the game at all except that it is challenging enough physically and mentally, and just plain fun for people to quickly become obsessed by it.  And is a game that fits any personality, body type, age, or competitive spirit.  It can played with extreme intensity or at a more leisurely pace, which contributes to its popularity.  I spent part of a morning photographing our friend, Ingrid, her fellow players, and others on the courts at the Ft. Marcy Recreation Complex in Santa Fe last week.  Armed with both my Nikons with both the 70-200 mm lens and 18-55 mm lenses, I photographed only the second sport I have ever photographed (a rodeo in Aztec, New Mexico was the other).  I learned a lot, including the facts that I needed just a slightly faster shutter speed (used 1/1600), and that there are ample opportunities to get shots of derrières.

On this particular morning, it did not take long to discover that the people who were playing were all quite competitive and very active in their play.  I took over 200 photographs in half an hour, basically because I did not know what to look for, and I wanted to get some decent shots.  I will continue to photograph pickleball play, but here is a sampling of my first foray into the game. 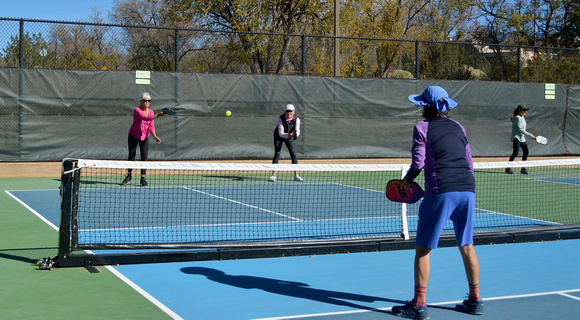 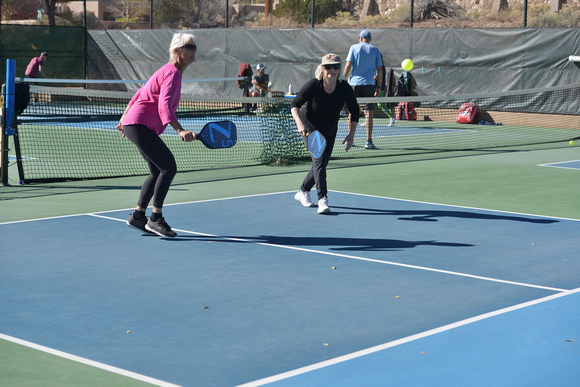 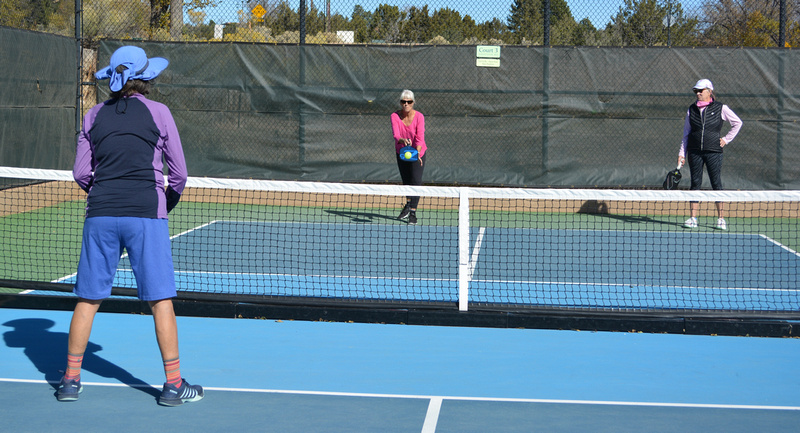 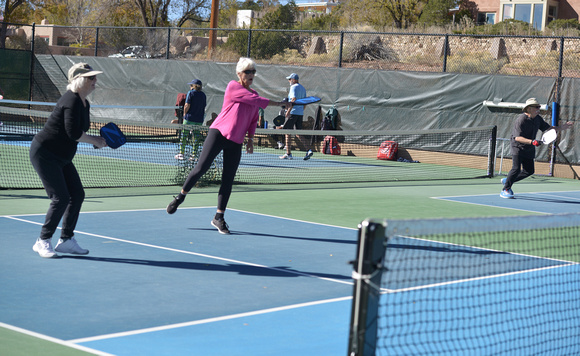 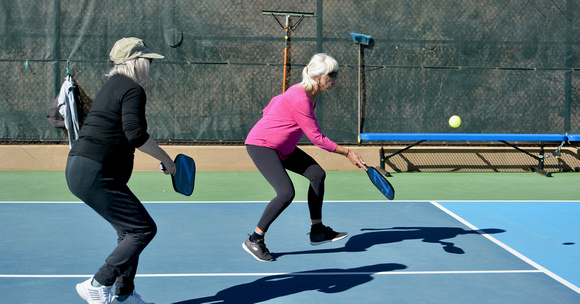 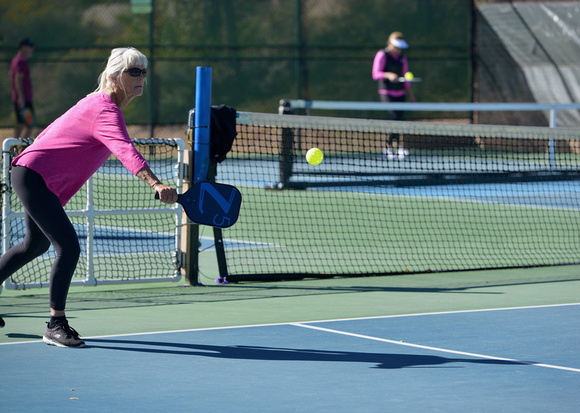 Thanks to Ingrid for allowing me to photograph her and the games, and to Barbara F. R., TTT, Steve, Catherine, Donna K., Phyllis, Ann A., Marilyn, Pater, and Lisa for commenting on last week's blog.

Dianne James(non-registered)
Daryl, you sure got some good shots! Pickleball is played up here in Monte Vista, but I've never played it. Might try, now that you've brought more light to the subject. Have you and Fred ever played?
Ingrid(non-registered)
Thank you Daryl for making my favorite sport the start of this week's Blog!
Before May of this year I had never heard of Pickleball ,when a friend introduced me to it. I immediately loved the sport: the speed, skill and quick actions requires. But most of all it creates instant camaraderie, laughter, fun for all ages, even though it does attract us seniors in greater numbers. It seems to be a very democratic and not an elitist sport, which is another aspect I appreciate.
Your photos capture the actions perfectly. I don't know much about photography, but action shots must be especially difficult. You came through with flying colors!
Robert(non-registered)
Quite a statement for pickleball enthusiast, one in particular who I recognized. What a hoot! Thanks
Steve Immel(non-registered)
Pickleball is certainly the rage even up here in the boonies. I'm told the queue to play at Quail Ridge starts very early in the morning and lasts all day. Your 1/1600 shutter speed stopped the action perfectly. Did you have to pan your camera or did the 1/1600 do the job. I've shot very few action sports and found that some amount of panning was helpful when, say, trying to atop a sprinter in mid-stride. Feature Isain Bolt in the middle of a 9.5 second 100 meter.

Super job of framing image two where everybody is preparing for the serve. And in image seven the woman in pink seems airborne. This is a strong set, Daryl. I'm anxious to see more action.
Lawrence T. Jones(non-registered)
Daryl, these photos capture the intensity of the game. There are pickleball courts in a nearby park and the game is so popular that folks begin playing at sunrise and don't stop until 9-10 PM.
No comments posted.
Loading...