Since I received an email from B&H Photo Video in New York - my place for purchasing cameras, computers, photo and digital paper and inks, and scanners - I have been pouring over photographs that would be suitable entrants for the "B&H Depth of Field Challenge" categories.  I needed to make sure that I had permission of the subjects before I submitted entries.  Trying to decide to submit color or black and white had to be considered as well, since many of the sponsors lean heavily toward color images.

Although my tendency is to try to second guess what judges may like, in a couple of categories I threw caution to the wind, as it were, because second guessing is nearly impossible.

The categories are:  Portrait, Wedding Day, Commercial/Editorial, Shot on Film, Group Portrait, Aerial Wedding, Creative Lighting, and Album Cover.  I entered the first five categories.  Only one photograph per category was allowed.

Since nearly every photograph I make - from people to animals to plants to landscapes - are portraits, I could have gone in any direction.  But I chose people. Trying to offer a combination of spontaneous, classic portraiture and the choice of black and white or color made it challenging.  I like the two images of Travis below. 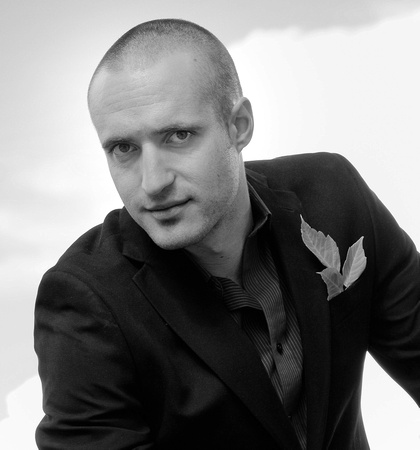 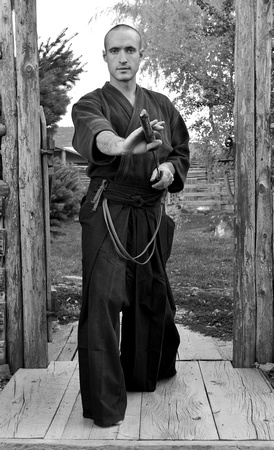 The image of "Zorba" at the door of his restaurant on Crete is a study in spontaneity. 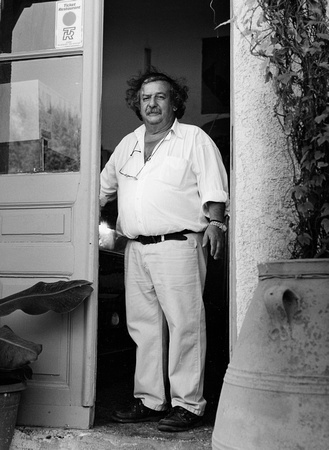 But this photo of Jessica is evocative on several levels, so I chose it for the "Portrait" category. One of the group photos from Kara and Eero's wedding combined both formality and fun, so it seemed like a good entry for the "Wedding Day" category. I was choosing between Ashley and Buf for the "Commercial/Editorial" category. 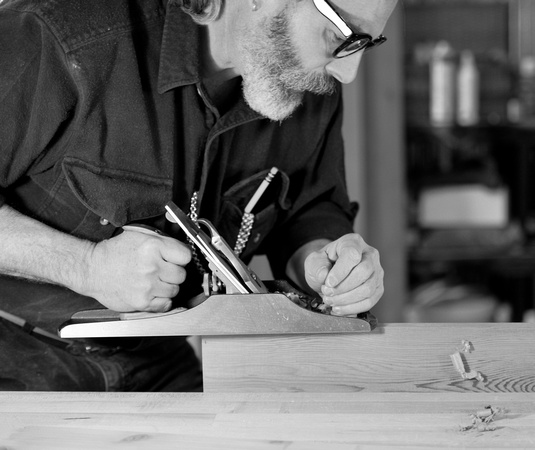 Buf is very photogenic and a terrific black and white subject,  but he was making something rather than advertising something, so I went with Ashley, modeling work at Taos Fiber Arts. 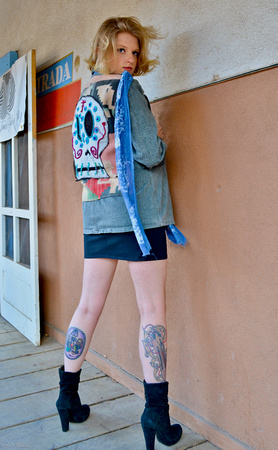 The next category "Shot on Film" took me back to a photograph I made with a Mamiya 1 3/4 x 2 1/4 format camera.  It was my first foray into any format camera larger than 35 mm, and it was before I began using Ilford HP 400 film, which I used for all my later portraits prior to digital photography.  This image was shot using Kodak Plus X Pan.  It was developed using the Sprint Developer offered at the Santa Fe Community College dark room.   Being a filmmaker himself, Walter Chappell was a compelling subject. There were many possible entrants for the "Group Portrait" category.  The suggestion for the category was "we want to see those pre-COVID (or masked and vaxxed) group portraits featuring two or more subjects".  I have always been fond of this photograph of Paloma and Fred dancing at a Taos restaurant. 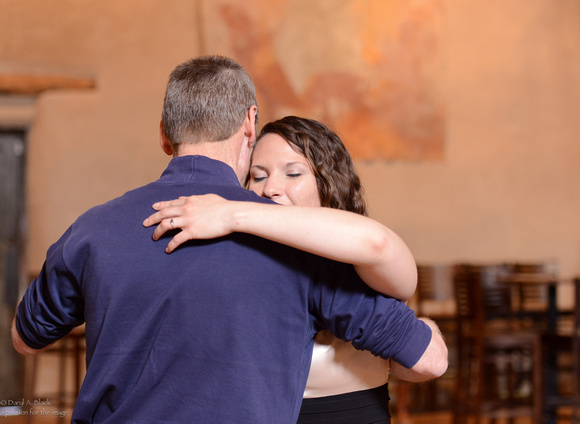 But the word "subject" in the challenge instructions was the key.  It didn't say people.  I would love to see the reaction to my "Group Portrait" entry - good, bad, or dumfounded.  At least it might make someone smile. Thanks to Victoria, Ann M., Barbara F. R., Paule, Jean & Sam, Steve, Catherine and Ingrid for commenting this week.  To hear from so many who were born before or during World War II, or had family members deeply involved was enlightening.  In the same vein, many stories are already emerging from Ukraine and Russia, as well as numerous bordering countries.  Nice to see Arnold Schwarzenegger's Twitter post, primarily addressed to the Russian and Ukrainian people in such a beautiful and respectful way this week.

Wayne Gesterfield(non-registered)
All wonderful shots.
Good luck on your challenge entrants
Dianne James(non-registered)
Once again, your photography is out-of-the-park amazing and beautiful. The photos range from elegant to the beautiful sepia tones of the sheep, evoking an archival feel. Travis was a great choice, and vcry different from most people's standard photos submitted, I would say. You're a very intuitive and wonderful photographer. Your photos speak volumes. Thank you for sharing.
Steve Immel(non-registered)
This is stellar roster of entries, Daryl. All are worthy of recognition. I congratulate you for putting your work out there. It's nervous making. Your smoky environmental portrait of Walter Chappell is a classic. I can look to my left and see my print of the image on my bookshelf. It's so timeless it could be from the 19th century. I think I purchased it at your group show in El Dorado many years ago. The sheep are apt models. They're really endearing. That's a group portrait by any standard. And, of course, I remember your photograph of the animated wedding party at Eero and Kara's wedding. It was the shot of the day. I'll go with Buf since he is so engaged in his woodwork and looks it looks candid.

Great set! Good luck.
Ann Alexander(non-registered)
I see I'm not the only one who loved the sheep! Also liked the Walter Chappell photo. Such talent!
Connie Taylor(non-registered)
The group portrait gets my vote, of course, and was present at all things sheep. Daryl bravely wandered through a barn full of 200 sheep. She was so collected and non- threatening that the sheep accepted her. Dust swirled in the dimly lit barn and yet she got fantastic images. Some of the wool from those sheep are woven into Fred’s textiles.
No comments posted.
Loading...